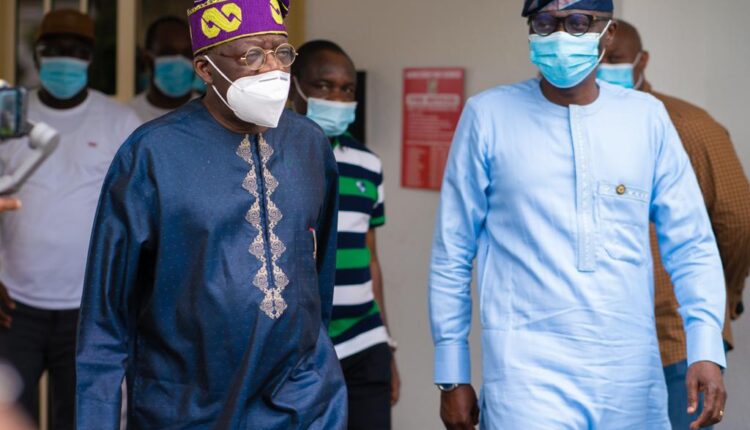 The National leader of All Progressives Congress (APC), Asiwaju Bola Tinubu, has commended Lagos State Governor, Babajide Sanwo-Olu, for presenting a 2021 budget formulated to restore hope and rebuild the state after the losses recorded during hijacked EndSARS protest.

Tinubu, a former governor in Lagos, also praised the Sanwo-Olu over plans to repeal the state pension law which had over the years mandated the government to give former governors and their deputies special pension allowance and severance packages.

The APC national leader said that the moves by Sanwo-Olu indicated he had a vision for the state and that since assumption of office over a year ago, had been embarking on them to ensure Lagos develop to a more enviable height.

Tinubu’s commendation came barely 24 hours after the governor presented next year’s budget before the state house of assembly and announced that plans had been concluded to review the state pension law particularly as it concerned ex-governors.

Through a statement posted on his official social media handle on Wednesday, he threw his support behind the plan and appealed to other governors to stop payments of jumbo pension allowance to former governors in their states.

He said: “Congratulations to Governor Sanwo-Olu over the Y2021 budget which he appropriately christened ‘Budget of Rekindled Hope’. This audacious and enterprising budget will empower our people and begin to rebuild Lagos State

“In particular, I would also like to commend the Governor for the plan to commence the repeal of the Pension Law giving pension packages to former governors and their deputies. This is a bold and courageous move by Mr. Governor and I wholeheartedly support him. I encourage all APC loyalists to do the same”, he added.

At the budget presentation, Sanwo-Olu stated that former governors and their deputies may be forfeiting their pensions and other entitlements should the bill to abolish the gesture being considered by the State Government gets a pass mark from lawmakers at the state’s House of Assembly.

As learnt, the move to repeal the Public Office Holder (Payment of Pension Law 2007), which provides for payment of pension and other entitlements to former governors and their deputies, was part of efforts to reduce government expenses.

Sanwo-Olu stated that the bill being considered was in line with his administration’s punitive measures being taken to cut governance cost and operate a less cumbersome and bureaucratic government.

During the presentation, he reiterated his administration’s commitment to stop at nothing in ensuring spirit of selflessness was given chance in public service across the state.

Sanwo-Olu added that the prevailing economic realities occasioned by outbreak of coronavirus and recent loss recorded across the state after violence, arson and destruction of public and private property that marred protest against police brutality across the state necessitated the measures being taken against the former governors and deputies.