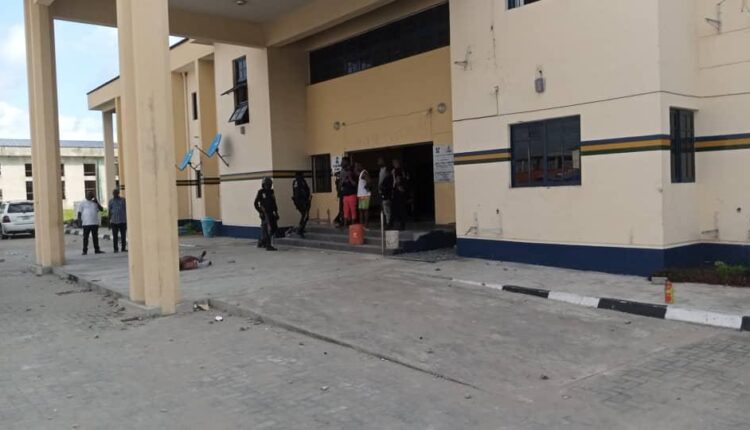 Atleast three vehicles were confirmed to have been set ablaze and two patrol vehicles vandalised when hoodlums attacked an Area J Command, Ajah following a fatal accident recorded on the Lekki-Ajah road.

The Command, which also houses the Elemoro police station, was reported to have been attacked by the hoodlums but were repelled by law enforcement officers within the premises.

After efforts to set the station ablaze proved abortive on Monday, the hoodlums, while leaving the station, pounced on vehicles in the state and set three ablaze, and vandalised two others.

Confirming the attack, Lagos Command spokesman, Olumuyiwa Adejobi, in a statement made available to The Guild, disclosed that the accident, which resulted in the attack, occurred at the early hours of the day.

Adejobi said: “Elemoro Division was not set ablaze. But the hoodlums burnt 3 exhibit vehicles and vandalised 2 patrol vans. The command has restored normalcy to Elemoro where another set of hoodlums attempted to set ablaze the newly built police station which accommodates the Area J Command, Ajah, and Elemoro Division of the command, in connection with a case of fatal accident recorded in the area, on Monday 24th May, 2021.

“The Commissioner of Police, Lagos State, Hakeem Odumosu, has deployed adequate personnel to the areas. He has also ordered that the incidences at Oke Odo, Ile Epo and Elemoro be thoroughly investigated. The details of the incidences will be revealed as soon as possible”, he added