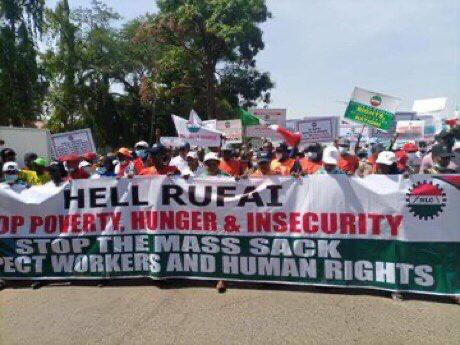 The ongoing demonstration by the Nigeria Labour Congress (NLC) against the disengagement of workers by the Kaduna state government, has been halted after hoodlums attacks the protesters.

As gathered, the thugs stormed the scene of the protest, attack and dispersed the NLC leaders and members in Kaduna from continuing their peaceful protest that had lasted for two days.

An eyewitness, Daniel John, narrated the development as “very unfortunate”, adding that although no one was injured, they were forced to suspend the peaceful procession for the day.

“We were at NEPA roundabout and about to be addressed by our chairman when the heavily armed thugs in their numbers arrived and began to wield knives and sticks while others throw stones at us.

“We were lucky security personnel were with us, who engaged the thugs and manage to disperse them and arrest some of them,” he said.

Another protester, Fatima Abdulhamid, who also survived the attack, thanked the police and other security personnel for displaying a high level of professionalism by quickly responding to the threat and overrunning the thugs.

Meanwhile, some of the thugs were said to have been arrested.

JUST IN: Idris Aregbe not stepping down as Surulere council chairman aspirant