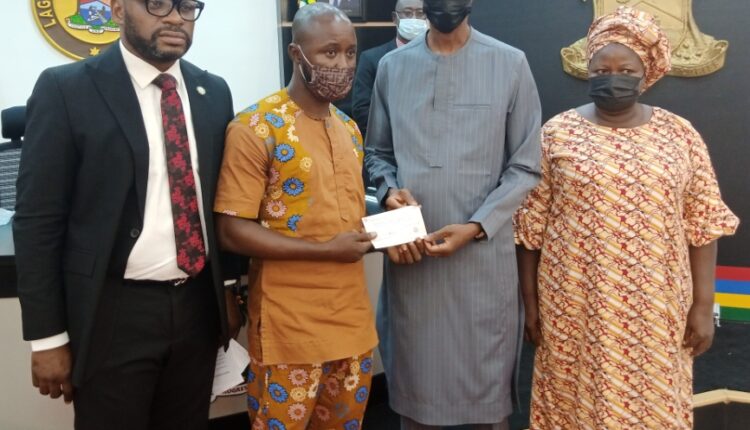 No fewer than three separate families of Nigeria Police Force (NPF) officers attached to security agencies in Lagos State who died on the line of duty have been compensated with N10,000,000.00 by the state Governor, Babajide Sanwo-Olu.

As gathered, the gesture was to fill the void left by the three breadwinners among the families and serves as succour for the loss of their deceased loved ones.

It was also learnt that the gesture by the governor to the bereaved families comprising of two Rapid Response Squad officers and one task force operative was in line with his commitment to support the security agency and reward bravery in the line of duty.

Presenting the individual beneficiary cheques of ten million nairas each to the bereaved families on Wednesday, Sanwo-Olu, who was represented by his Chief of Staff, Tayo Ayinde, empathized with the affected families and assured of the government’s interventions where necessary.

He described the monetary support as a token and the government’s efforts at comforting affected families, maintaining that, no amount of financial gift can make up for the lost lives and the gallantry of the fallen patriots.

The governor also commended and appreciated the gallantry of the deceased operatives, reassuring the families and Lagos residents of the government’s decisiveness to always work for the good and wellbeing of the masses.

Speaking on behalf of the three beneficiary families, a son of one of the deceased, Olufemi Odeniyi, expressed gratitude to Sanwo-Olu for the lifeline, while wishing everyone present and the government greater success and impact in the lives of Lagosians.

While Late Inspector Ajibola Gafari died on duty as a result of a hit and run driver on 25th January 2020 at Falomo under bridge, SPY ‘PC’ Olufemi Richard died as a result of sickness he developed while on duty on 21st of June, 2020.