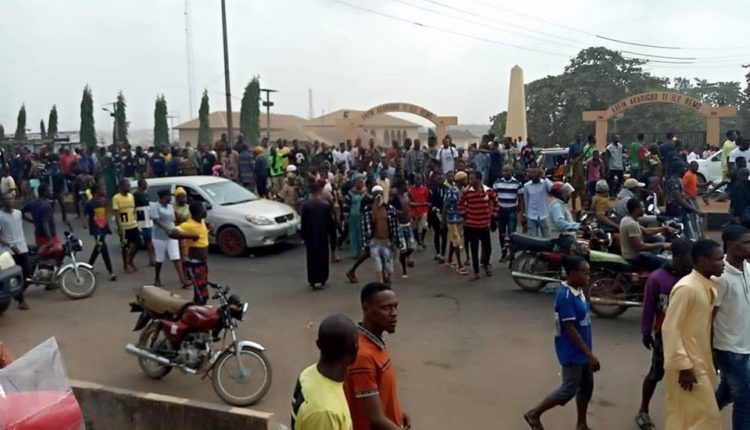 It was blood and mayhem in the Sagamu area of Ogun State, where armed policemen alledgedly shot tear gas and live rounds of amunition into a crowd of protesters in a bid to disperse them, leaving three feared dead.

The Guild gathered that the crowd, which was made up of mostly youths, had taken to streets in protest against the  controversial Special Anti-Robbery Squad (SARS), asking that alleged cases of extra judicial killings, abuse of power, robbery, torture and flagrant disregard for human rights be investigated, and that offending officers to be prosecuted to full extent of law.

Eye witnesses narrated that some of the protesters had gotten restive and began destroying properties as the protest went on, and that the men of the Nigerian Police Force, Ogun State Command, had shown up to disperse the crowd.

Several of the protesters sustained varying degrees of injuries, with some, who were alledgedly shot by responding policemen, dead.

The Guild gathered that the protest was likely in reaction to recent demise of Remo Stars Foot Club’s Assistant Captain,Tiamiyu Kazeem AKA Kaka, who had alledgedly died due to being pushed out of a moving vehicle by SARS operatives.

Kaka’s sudden death, which had been described as unfortunate by the Ogun State Governor, Dapo Abiodun, seemed to have sparked sentiments amongst fellow players and supporters, and is suspected to have been catalyst behind the protest.

Abiodun, eulogised the late player as a young man with great potential for State development, and strongly stated that his government would never take with levity, the lives and property of citizens and residents of Ogun State.

The governor stated that proper, transparent and independent investigation would be launched into Kaka’s death, and gave assurance that the guilty officers would be apprehended and brought to justice.

He urged citizens and residents of the State to maintain peace and calm during investigations, adding that no one should take laws into their hands as his government was responsive, and would not tolerate any breach of peace.