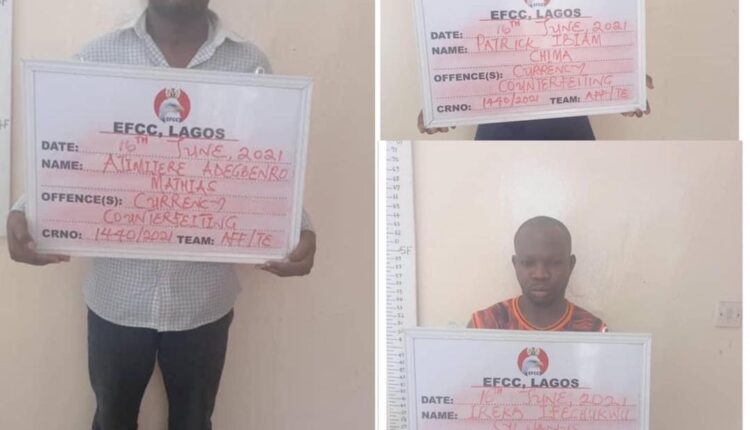 No fewer than three Lagos State fake foreign currency printers may end up serving jail terms behind bars should they be found guilty of allegedly counterfeiting currency.

The trio was reported to have been arrested and placed under the Economic and Financial Crimes Commission (EFCC) detention over their alleged involvement in the production of fake foreign currencies.

As stated, the three suspects, identified as Sylvannus Ifechukwu, Patrick Ibiam, and Ajimijere Adegbenro were said to have been detained at the Lagos Zonal Office of the anti-graft agency.

It was gathered that EFCC has commenced investigations into the alleged case of conspiracy and currency counterfeiting leveled against the three suspects.

Confirming the development, EFCC’s Head of Media and Publicity, Wilson Uwajaren, in a statement disclosed on Wednesday stated that the suspects were arrested by the Nigeria Police Force Intelligence Bureau, Force Headquarters on April 30, 2021, in the Obalende area of Lagos.

Uwajuren added that the security operatives subsequently handed over the suspects to the anti-graft agency for further investigation and prosecution.

“The suspects, who are into currency counterfeiting, allegedly have a network spread across the globe,” the statement said.

The EFCC spokesman hinted that investigations revealed that the suspects have an operational base located in Brazil and that they were involved in the alleged production of fake foreign currencies such as US dollars, pound sterling, and euros.

According to Uwujaren, they also source for buyers at strategic locations, including hotels, Bureau de Change offices, and social gatherings within the Lagos metropolis.

“Upon their arrest, some incriminating materials were recovered from them. The suspects will soon be charged to court,” the statement added.