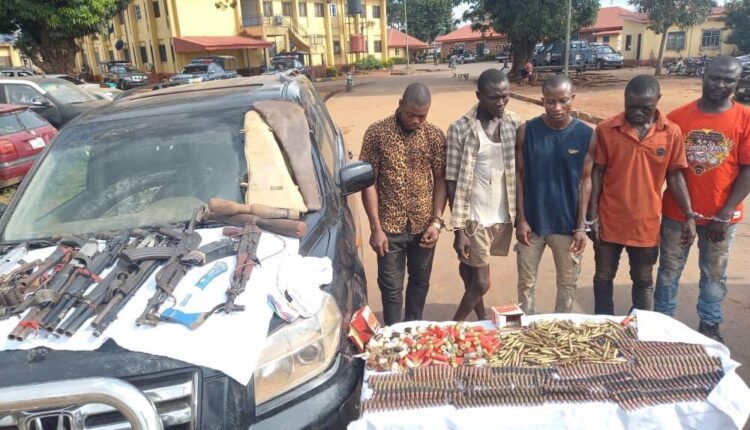 No fewer than three armed robbers were reported to have died and five others under detention after the Nigerian Police personnel attached to Ebonyi Command clashed with a gang of armed robbers specialised in bank attacks across the state.

Aside from the deceased, who were two males and one female, five other members of the gang responsible for the foiled commercial bank attack have been paraded by the law enforcement agency with the ammunition recovered after the clashes that lasted several minutes.

As gathered, the clashes between both parties occurred at their hideout in Oriuzo village, Ezza North Local Government Area of Ebonyi State, and that after the face-off, two Ak47 rifles, five pump action guns, six pistols, 50 Ak47 ammunition, and 126 cartridges were retrieved from the robbers’ hideout.

Also recovered from the scene include Jack knives, cutlasses, and a 40-page notebook containing inventories of ammunition purchased, and a Honda Pilot Jeep with number plate ABJ 163 NJ used for the foiled bank robbery earlier in the year were all recovered by the law enforcement agency.

Announcing the arrest on Sunday, the Force Public Relations Officer (FPRO), Frank Mba, said that the suspects, on sighting the Police squad that trailed them to their hideout, started shooting to scare them away.

Mba noted that rather than back down, the law enforcement agency led by the commissioner of Police for the state, Aliyu Garba, resisted the attack, shooting at the armed robbers, an act that force the suspects to abandon their hideout and escaped.

He said: “Unrelenting in their quest to apprehend the remaining suspects, the Police team traced the suspects to a shrine where the robbers usually go for mystical powers before embarking on their robbery operations. Two of the suspects were eventually arrested from the supposedly safe haven, the shrine. Meanwhile, efforts are ongoing to arrest other fleeing members of the gang and their spiritual godfather, the chief priest of the shrine”.

The Inspector-General of Police, Ag. IGP Usman Baba, while commending the command for excellently harnessing intelligence to nip the crimes in the bud, assured Nigerians of the force renewed commitment to improving public safety and combating all forms of violent crimes across the land.

How gunmen killed Policeman, injure other during station attacks in Ebonyi