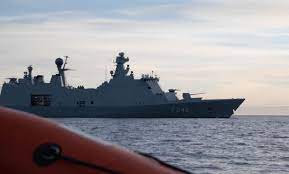 Three Denmark-based Nigerians captured by the Danish navy in the Gulf of Guinea in November and brought for prosecution before a court in Copenhagen over alleged manslaughter of Danish soldiers has regained freedom.

The ship which deployed off West Africa in October by the suspects, intervened in an alleged attack on a commercial vessel the following month, killing four pirates and taking another four suspects on board the frigate.

The suspects were said to have been picked up by a Danish frigate at the same time and charged with the same charges but were freed on Friday after Denmark failed to find a country in the region to take them.

The Danish Armed Forces stated that the three, who had been detained aboard the frigate Esbern Snare in the Gulf of Guinea, were put to sea in a small dinghy with enough food and fuel for them to reach safely to shore, after the charges against them were withdrawn.

Also, the Danish Justice, Nick Haekkerup said that the suspects had no relation to Denmark when investigated, adding that the crime they committed was not in their country which makes their release the best thing to do.

“They have no relation to Denmark, and the crime they have been charged with was committed far from Denmark. They simply do not belong here, and that’s why I think it’s the right thing to do,” he said.

Meanwhile, a fourth suspect, who was taken to a hospital in Ghana with injuries and later had one leg amputated, was brought to Denmark for prosecution but he was not released at sea due to his medical condition.