Three American white men who were reportedly convicted of murdering Ahmaud Arbery, a 25-year-old black avid jogger running through their coastal Georgia neighborhood in 2020 may bag life imprisonment before a United States jury.

The  jury who would be delivering the judgement, had found the suspects, 66-year-old Gregory McMichael, his 35-year-old son, Travis McMichael, and their 52-year-old neighbor, William “Roddie” Bryan, guilty in late November of murder, aggravated assault, false imprisonment and criminal intent to commit a felony.

On their part  on Friday, their lawyers said that they will appeal the convictions of their clients. However, all three men may also face a federal trial in February on hate-crime charges, accused in an indictment of violating Arbery’s civil rights by attacking him because of his “race and color.”

According to a lawyer for Gregory, Frank Hogue, he stated that he would appeal the convictions for possibilities of life, adding that it might make any difference because of the age of his client.

“Obviously we’re going to argue for life with the possibility of parole. Practically, that doesn’t mean much of a difference for a 65-year-old man.” he said. 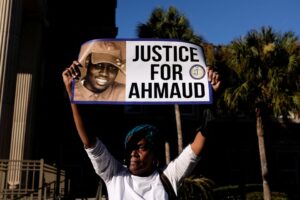 As gathered, Arbery, was running through the mostly white residential neighborhood of Satilla Shores on the afternoon of Feb. 23 when the McMichaels decided to grab their guns, jump in a pickup truck and give chase. The younger McMichael had later testified to the jury that they had a hunch Arbery might be fleeing a crime.

Bryan joined the chase in his own pickup truck after it passed his driveway, and pulled out his cellphone to record Travis McMichael firing a shotgun at Arbery at close range. Arbery had nothing on him besides his running clothes and sneakers.

The video caused outrage when it emerged months later and it became clear that none of the men involved had yet been arrested after a local prosecutor concluded the killing was justified.

The three men will be allowed to address the court if they wish during Friday’s hearing, and prosecutors from the Cobb County district attorney’s office will be able to call on Arbery’s relatives to share victim impact statements.