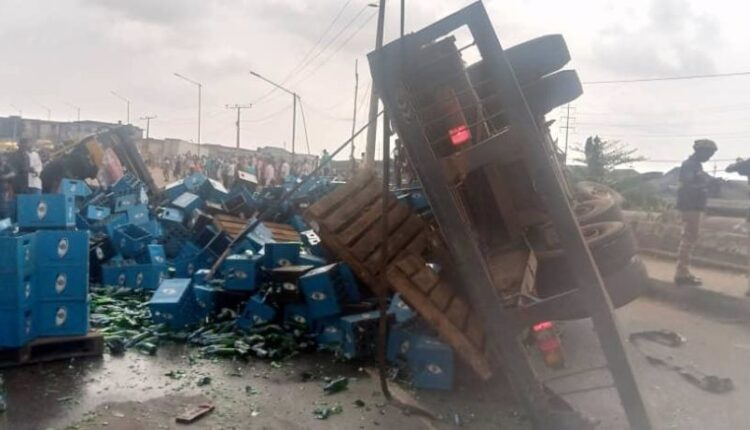 Share
An unidentified teenage girl and two adults were said to have died when three vehicles and a truck collided in Abule-Egba axis of Lagos State.
The two adults were said to be occupants of the truck that was conveying alcoholic drinks. And one of the deceased was identified by residents as Christopher Eyor.
It was learnt that the teenage girl and Christopher, after recovery of their bodies from the accident scene by officials of the Lagos State Emergency Management Agency (LASEMA) and bystanders, were handed over to their family while the second adult was picked by State Environment Health Monitoring Unit (SEHMU).
As gathered, the accident, which resulted into gridlock in the axis, occurred on Sunday at about 5pm with scores of others injured after the truck fell and threw its loads on the road.
Confirming the tragedy, Direcyor-General, Dr. Olufemi Oke-Osanyintolu, said that bodies of those that lost their lives during the unfortunately incident have been recovered from the scene.
He said: “The other affected vehicles have been recovered from the carriage way to a lay by with the use of the Agency’s light tow truck in order to ease traffic pressure”.
According to him, operation is ongoing as the responders are awaiting the Agency’s heavy duty equipment and officials of Lagos State Waste Management Authority (LAWMA) to clear the waste off the road.