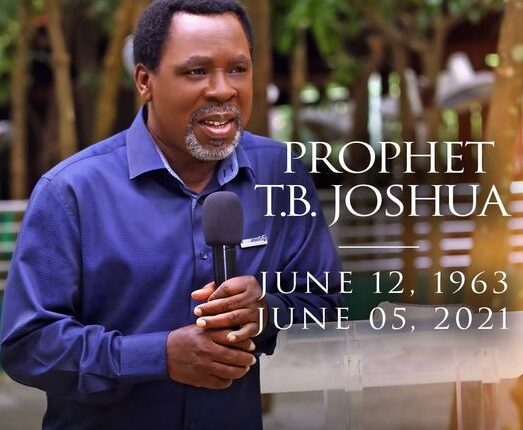 Wife of Temitope Balogun Joshua, the deceased founder of Synagogue Church of All Nations, Evelyn Joshua, has disclosed that her later husband’s death was predicted before his passing away during the weekend.

She noted that though pains that come with losing one’s lover were unimaginable, the Televangelist’s death did not come as a surprise to her as the late Joshua had premonition of his last moments.

Evelyn maintained that no matter how highly placed, the pang of death would always strike and that knowing the fickle nature of life, her late husband had prepared for the unavoidable journey.

According to her, my husband’s departure wasn’t a surprise to me as I have been used to him saying his ministry is what he would die for.

Speaking when Lagos State Government delegation paid her a condolence visit to commiserate with the family of the deceased minister, noted that the death of her husband didn’t come to her as a surprise.

Evelyn while appreciating the state government for the visit, describing the incident as an act of God and that it would gladden her heart, and that of church members if Governor Babajide Sanwo-Olu attends the burial ceremony.

“On behalf of myself and the entire synagogue family, we are grateful, (and) thankful for your presence here today (Wednesday).

“What happened is an act of God. There is time for everything. Like my husband does say. That is the word I knew from him very well. This is the job he was known for. This is what he was living for. That is what he was going to die for.

“So, it didn’t come to me as a surprise. I wasn’t surprised when it happened. As we all know, he was in service that day. So, that’s it. I appreciate you all. I’m pleading, this is my message to the Governor. We need you; we need your presence,” she said.

On his part, the State’s Commissioner for Home Affairs, Prince Anofiu Elegushi, who led the government delegation, said that the delegation was visiting on instance of the governor.

“We are here on the directive of the Lagos State Governor, Mr. Babajide Olusola Sanwo-Olu to pay a condolence visit and offer prayers to the family of our beloved pastor and prophet T.B. Joshua.”

Also speaking, the Presiding Chaplain, Chapel of Christ The Light, Venerable Ezekiel Oluwadare, while praying for the deceased family during the visit, described “Prophet T. B. Joshua as a great man of God, who would be missed by all.”

Oluwadare also described the late prophet as “A philanthropist, the Jesus of the time, as well as a man loved by all and who abided by the Federal Government’s rules of Covid-19 during the lockdown.” He prayed that the Almighty God would grant the family of the late prophet and SCOAN the fortitude to bear the loss.