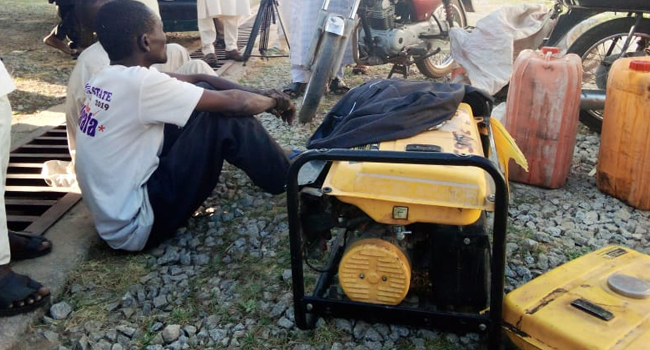 As part of efforts to end criminalities across Zamfara, the State Government through its taskforce has arrested three suspected logistics suppliers for bandits across the state.

After the arrest, the state government has shut down a filling station in Tsafe and the bakery in Gusau local government areas of the state for being the outfits supplying the logistics providers.

Aside from that, the state’s taskforce has also impounded two commercial motorcyclists discovered to have been used by the logistics suppliers to transport items required by the criminals in the bush.

The arrests were confirmed through a statement made available to newsmen yesterday, the chairman of the task force committee, Abubakar Dauran, noted that the task force also recovered two motorcycles, one filled with fuel while the other was carrying a loaf of bread, two jerry cans, and a functional generator with fuel from bandits’ collaborators in Tsafe and Gusau LGAs of the state.

Dauran, who is also the special adviser to the Zamfara State Governor on Security Affairs, explained that the fuel suppliers have been using a functioning generator to obtain the fuel from the filling station to fill jerry cans which they believed they would take to bandits in the bush.

According to the chairman, the three suspects are to be handed over to the police for further investigation and prosecution.

He enjoined residents of Zamfara State to support the fight against banditry by adhering to the new order for the containment of the security challenges being faced in the state.

The task force was constituted by Governor Bello Matawalle following the new security measures put in place to curb banditry in the northwest state.

Herdsmen kill over 10 villagers during fresh attacks in Plateau