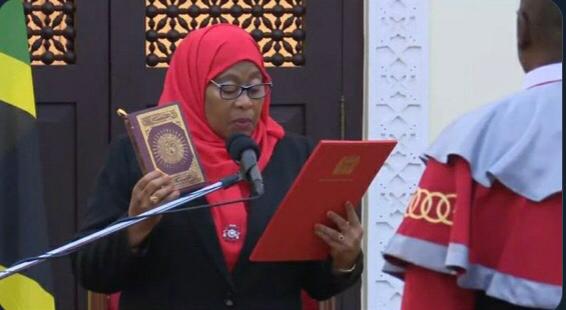 The Tanzanian former Vice President, Samia Hassan, has been sworn in as the East African country’s first female president barely two days after the sudden death of the ex-president, John Magufuli, who died after suffering heart failure.

The 61-year-old who was sworn into office at a ceremony in the commercial hub of Dar es Salaam on Friday now faces the arduous task of securing political control of the nation.

As gathered, her rise to the presidency was in line with the country Constitution that states that the vice president takes over as president if the office of the president becomes vacant.

The nation’s sixth post-independence ruler, who took the oat of office on Friday, putting her right hand on the Quran, has assured the citizens to fair and protect the constitution of Tanzania.

Speaking while taking the oath of office, Hassan called for unity in the nation and urged citizens to maintain peace. “It is not the time to point fingers at each other but to hold hands and move forward to build the new Tanzania that President Magufuli aspired to.”

Hassan, in the inauguration speech, said the death of the former president came shocking to her, adding that she was not prepared to become the President of the country.

“It’s not a good day for me to talk to you because I have a wound in my heart, today I have taken an oath different from the rest that I have taken in my career, those were taken in happiness.

“Today I took the highest oath of office in mourning. I was not prepared for this nor did I ever expect us to lose our president,” she said.

In her first public address as president, Hassan announced 21 days of mourning for Magufuli and public holidays on March 22 and on March 25, the day the late president will be buried.

Nigerians should give PDP another chance in 2023 – Saraki