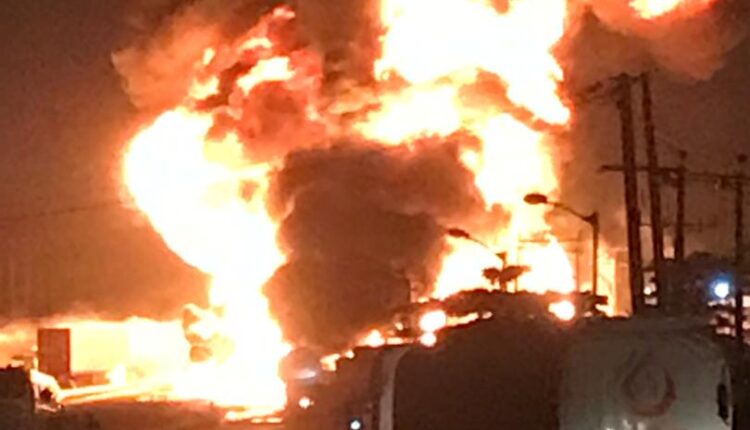 Share
Residents of Mile 2 Estate  in Amuwo-Odofin Local Government, Lagos State were said to be enveloped in fear after a tanker explosion occurred in the mixed community, destroying property worth million of naira.
The Guild gathered that the explosion was said to have occurred at about 1:30 am on Thursday after the ill-fated tanker laden with Petrol Motor Spirit (PMS) fell within the community and its spilled content littered the drainages.
It was learnt that the tanker exploded a few meters away from a soft drink company, LACASERA, on Apapa-Oshodi expressway and destroyed over four other trucks within its radius.
Eyewitnesses narrated that after the explosion, Mile 2 community security team raced to the scene to manage the situation while expecting Lagos State Emergency Management Agency (LASEMA).
The Director-General of LASEMA, Dr. Olufemi Oke-Osanyintolu, who confirmed the incident, stated that the fuel tanker loaded with PMS overturned and burst into flames due to the oil spillage.
Oke-Osanyintolu noted that the fire that emanated after the explosion in turn affected some stationary trucks parked inwards Apapa end of the road.
According to him, a combined team comprising Lagos Fire, Police ,Federal Fire and Agency Responders have extinguished the flames, just as efforts are ongoing to remove the affected vehicles is ongoing while road users are encouraged to use alternative routes.