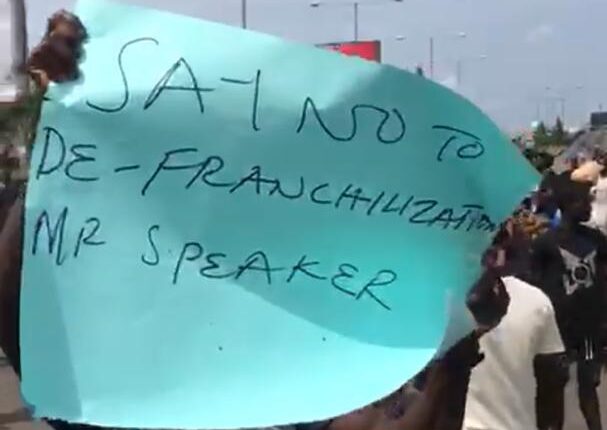 Starting from tomorrow, Lagos State Government may be faced with sleepless night should youths in Surulere Local Government Area and members of the Road Transport Employee Association of Nigeria (RTEAN) go into a face-off which they have secretly entered through a battle line said to had been drawn by the two groups after All Progressives Congress (APC), council primary elections held over the weekend in Lagos.

The battle line drawn by both groups had sent a strong signal to Surulere environs as well as its residents and the state government may have to double security presence in the area to ensure safety of lives and property.

From the aggrieved youths, they have threatened to take their agitations to the streets in demanding death of their fellow two young men, Seyi Olujide and Fofo Efue, who were claimed to have been killed by members RTEAN during the council primary elections that trigger into series of violence witnessed across Surulere.

They indicated that their protests across the council are not likely to be peaceful due to thugs from RTEAN who are likely to be planning to hijack and disrupt the demonstrations and that Lagos State Government and APC may be held responsible for any loss of lives and property destruction that may occur during the protest.

Some of the youths who spoke to The Guild on the planned protest disclosed that information had been sent to entire Surulere youths to gathered for demonstration and that their action became necessary after events that played out from APC council primaries in which lives of promising youths were cut short.

They said that the unfortunate situations were avoidable if the Lagos chapter of APC did the needful and not played with lives of innocent people who were only out during the primary elections to exercise their fundamental rights.

They alleged that the body language of APC leaders and even Lagos State Government was an indication that politicians and public officeholders have no respect for human lives contrary to what they claim to stand for.

The youth, in their unanimous voice, said that instead of APC to commiserate with families of the two young men killed during council primary elections and condemn other violence reported within the axis, the party immediately moved on with other activities, pretending to be less concerned about the loss of lives and property within Surulere.

A source from Surulere Local Government secretariat, who confided in The Guild, disclosed that the council chairman and other executives have been notified of the clashes over the APC council primaries outcome that could begin to spring up across Surulere and possibly cripple the peace and harmonious relationship that had existed over the years among residents.

To possibly forestall the plans, he disclosed that officials have started making moves to meet some of the youth leaders and RTEAN members that could be planning to participate in the clashes that the office council chairman has described as too weighty to be allowed to occur.

According to him, the office of the chairman had initiated moves to prevent any clashes and to possibly pacify the youth to accept outcome of the party’s council primarily elections for the July elections to be conducted by Lagos State Independent Electoral Commission (LASIEC).

An APC leader from one of the nine wards, who preferred to speak anonymously, disagreed with the council on plans to pacify youth to shelve their plans and accept outcome of the party’s primary elections, just as he stressed that the outcome could only be accepted when it was obvious that tenets of democracy were strictly adhered to during last weekends exercise.

He argued that the exercise held last weekend was far below what could be described as a democratic exercise, saying there was no council primary elections held in any of the wards and so which outcome should the youth accept, the imposition, which APC state secretariat assured members would not be allowed including National leader of APC, Bola Tinubu, publicly insisting that votes of members must be allowed to count.

“And on the day of the elections, members trooped out to exercise their fundamental rights but were surprised that they could not vote because some members felt that the outcome may not favour them and all they could do was to bring cultists and thugs loyal to RTEAN who were armed with different weapons.

“During the exercise, last weekend, two youth that were assisting to ensure the exercise remain free and fair were killed for querying their intention to disrupt the exercise. These young and promising individuals were killed and rather than the party sending an emissary to commiserate with families of the deceased, it went ahead as if nothing happened particularly handing over nomination forms to anointed candidates of some politicians. This is unfair and we all need to know that. So for me, I will not stop anyone from embarking on their plans”, he added.

Another member of the party, a youth, stated promises made before by APC Lagos chapter was that youth would be accorded a special place within the party, starting with the post of Youth Organising Secretary office and elective positions to inculcate leadership skills in them.

But the activities that played out during last weekend primaries and actions embarked upon by the leadership after the exercise clearly indicated that the promises were not real and rather, were just to get youth to form a major nucleus of APC in Lagos.

He said: “For Instance, out of the over 30 members of Lagos APC executive, one member, Idris Aregbe, who is the incumbent Youth Organising Secretary, contested for council primary elections and all the leadership could do was to deny him an opportunity to contest and win. This is unfair.

“I know one thing for sure that Aregbe had been contributing to the development of APC, attracting youth into APC and assisting with projects that will bring development and make them see the need to support APC across the state. I will appeal that the APC leadership reconsider their stance”.

Aside from the clashes that may occur, The Guild investigations revealed that hundreds of party members across the state particularly in Surulere have started setting their membership slips on fire, in protest against what they described as injustice during the just concluded council primaries held across the state.

Loneliness made me rape my neighbor’s daughter – Ondo farmer