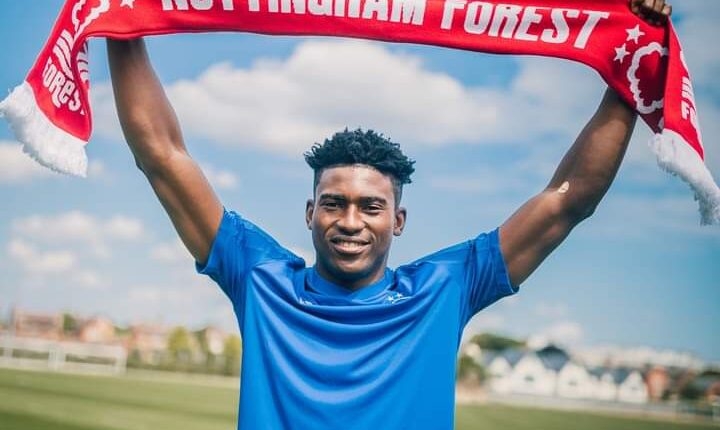 Awoniyi, who started his professional career with Liverpool 7years ago, moved to the English team from Union Berlin for a club-record fee in the region of £17.5m.

After signing his contract documents on Saturday, the 24-year-old striker became the newly-promoted Premier League side’s first international signing of the summer.

Awoniyi scored 20 goals in 43 games across all competitions last season and his 15 goals in 31 Bundesliga matches also helped Union Berlin secure a fifth-place finish and qualification for the Europa League for the first time since 2001/2002.

Speaking to newsmen after he was unveiled on Saturday, the forward explained that his decision to return to England was influenced by the team’s coach, Steven Cooper.

While expressing his excitement to return to England, the striker promised the fans that he would work hard and score goals for the team to ensure that the team retain its EPL slot.

“It’s always been my dream to play in the Premier League and having spoken to Steve Cooper about our ambitions and looking at Forest, with its great history, it’s a club that I want to be part of.

“My dream is to always keep working and I see him as a person who I can develop under. For me, it’s always about hard work, dedication, and believing in God. When I look back at the games with Union Berlin, it was always about the team for me.

“When I look at Forest and look at the history of the club, it’s even more about the team. This is the kind of place I love to belong to and I am ready for it.

“Every striker wants to score goals, but I’m ready to work for the team, to fight for every ball, to win every challenge, that’s my style and that’s what I’m here for”, he added.

Cooper, on why he choose said: “There’s been a lot of interest of Taiwo from other Premier League clubs, and other clubs across Europe, so we’re delighted that he’s chosen, Nottingham Forest.

“Our recruitment and coaching teams have been monitoring his progress closely over the last few months. He’s a player who we really believe in and we look forward to him going on to fulfill his potential and become a top Premier League striker with Nottingham Forest.”

Awoniyi, it would be recalled, began his professional career at Liverpool, signing for the Merseyside club in 2015 before having loan spells at FSV Frankfurt, NEC, Mouscron, Gent, and Mainz 05.

He joined Union Berlin on loan during the 2020/21 season and made the move permanent last July, after scoring five crucial goals for the team.
Having represented Nigeria at U17s, U20s and U23s level, Awoniyi won the first of his three caps for Nigeria against the Central African Republic in October 2021 and scored his first goal against Sudan in January at the Africa Cup of Nations.