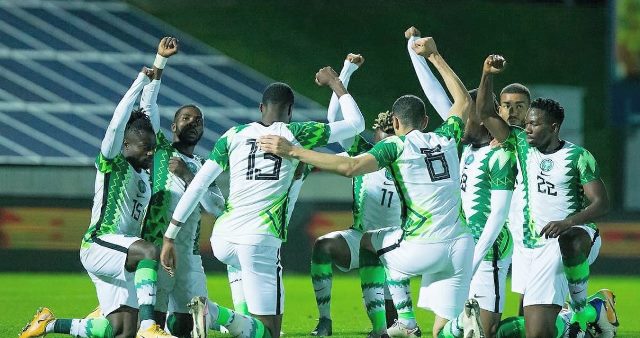 The Nigerian national team coach, Augustine Eguavoen, has disclosed that the team would be going for three points when they take on the wild dogs of Guinea-Bissau during the last group D match at the ongoing 2021 Africa Cup of Nations (AFCON).

He said that though the Nigeria national team which currently top the group and have secured qualification for the next round just need a draw to cement their top position, the team would still ensure it get the maximum three points.

The eagles have six points from two games having beaten Egypt and Sudan, while struggling Guinea-Bissau has just one point from their draw with Sudan and 0-1 loss to Egypt.

However, the Super Eagles head coach said that there will be no room for complacency as the team will approach the game with the mindset to win in spite qualification.

“If we let down our guard, we could be punished, and that would not be good for the team’s psychology. We will go for the three points,” he said.

The coach, however, said that the match will afford him opportunity to field players who have not tested action in the competition.

“Obviously, we will make changes for the last group game against Guinea-Bissau. We have depth in the team and its a good opportunity for the other players to play. We will play to win the game and I trust the players to do a great job,” Eguavoen said.

Guinea-Bissau head coach Bassiro Cande, however, said that the team will go all out against Super Eagles, with qualification still on their mind.

Guinea-Bissau team, which was making its third appearance at the AFCON remain winless in their eight matches in AFCON. The Super Eagles are currently ranked 36 in FIFA ranking, while Guinea Bissau are ranked a distant 106.

The West African derby billed to take place at the Stade Roumdé Adjia, Garoua, Cameroon on Wednesday by 8 p.m. promises to be highly entertaining in spite the contrasting fortunes.