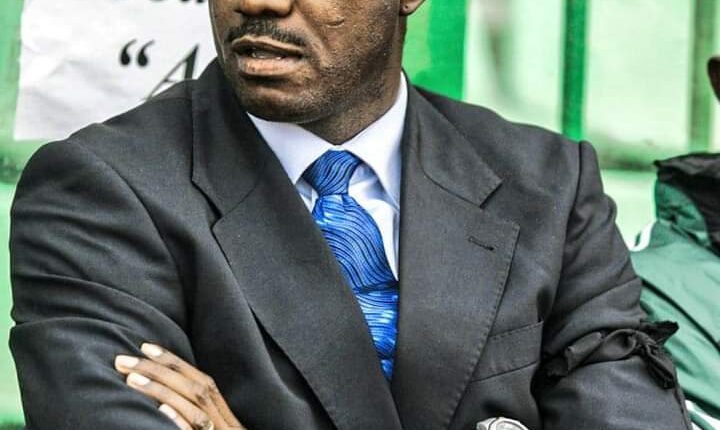 If I were Augustine Eguavoen, I will put my search light on the local league now to get some hungry home-based players.

I will scout for defenders in our domestic leagues who can win matches for me. I will look inward and build on the templates of late coach Stephen Keshi and his former boss and coach Clement Westerhof.

I will take a critical look at the roles and performances of local lads in the three AFCON Nigeria had won in 1980, 1994 and 2013.

With these insights, Eguavoen will realise that the Green Eagles that won the first ever African Cup of Nations for Nigeria in 1980 were indigenous players.

In Tunis in 1994, one Emmanuel Amuneke who was playing for an African club, Zamalek of Egypt, sank the Zambians as Nigeria lifted the cup for the second time. Amuneke was regarded as a local lad until he moved to Barcelona.

In 2013, Steven Keshi introduced one Sunday Mba who was playing in Nigeria premier league to wreck Burkina Faso. He scored the only goal of the match for Nigeria to lift the cup for the third time.

No Europe-based professional has ever scored winning goal for Nigeria to win AFCON final. Segun Odegbami, Amuneke, Mba did it as home-based.

Eguavoen needs a mixture of Europe based and locally made professionals for him to do well at African Cup of Nations (AFCON) and World Cup playoff.

Gernot Rohr has done a lot in recruiting too many attackers for the Eagles but failed to provide us with a creative midfielder and strong defenders.

Eguavoen needs to build a strong defence and he can do this by looking inward. As a matter of fact, a former Super Eagles captain, Joseph Yobo, was discovered in our local league and one could remember how he marked out George Weah years ago in one of the qualifiers.

Yobo went on to become one of Nigeria’s best defenders. There are hundreds of Yobos in our local leagues. The Super Eagles squad needs a better replacement for Troost Williams-Ekong. The guy is not doing well at present. Watford may offload him soon due to his primary schoolboy errors recently.

Leon Balogun is good no doubt with his overlapping skills but his recovery rate is slow. He will give up easily under immense pressure. Only Ola Aina and Jamilu Collins can soak up pressure at the Eagles defence.

Nigeria’s attack is potent and more dangerous going by the quality of the players now but their usage matters and this will depend on the tactics and techniques of the coach.

I pray Victor Osimhen recovered before AFCON,he will be too much for the defence of any team. Samuel Chukwueze played his 100 games for Villarreal at the weekend, he is a plus now and if Victor Moses can return to the team, Nigeria will have a good show at AFCON.

It is surprising that Rohr who played as a defender for Germany found it difficult to build a strong defence for the Eagles. Perhaps Eguavoen can do this being a defender himself.