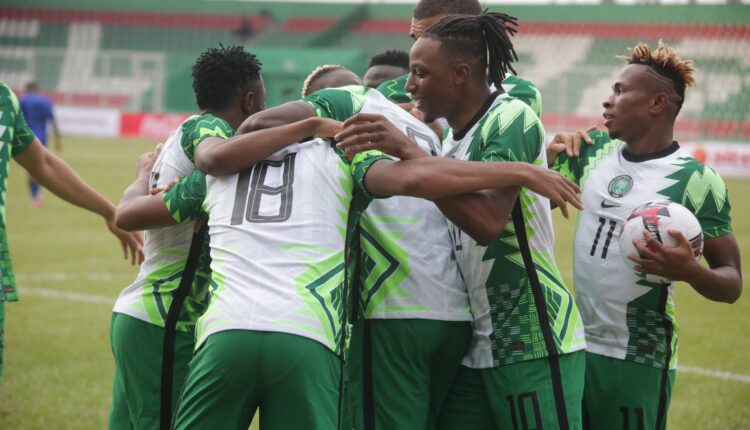 After losing two friendly matches, the Super Eagles returned to winning form, defeating the Leone Stars of Sierra Leone 2-1 during first game of their 2023 Africa Cup of Nations (AFCON) qualifiers.

The Nigerian team secured the victory after coming from a goal down and doubling the lead, as well as ensuring that their visitors do not equalise after going ahead during the game.

During the game played on Thursday at the Moshood Abiola National Stadium in Abuja, the visitors took the lead in the 11th minute of the match through a flying header by Jonathan Morsay.

After struggling to take the lead, the Nigeria coach, Jose Peseiro, rallied his players and five minutes later, the team equalised through Everton of England forward, Alex Iwobi. And before concluding the half, increased the lead through Napoli striker, Victor Osimhen.

Fuelled by an impressive form which saw them win (versus Liberia and Congo) their last two matches in all competitions, John Keister’s men started the match on a lively note.

Regardless, they could have been punished in the second minute, nevertheless, referee Ibrahim Traore waved aside a penalty from Super Eagles after John Kamara appeared to have handled the ball in the dangerous area.

The Leone Stars could have taken the lead in the fourth minute, but Mohamed Buya Turay’s well-taken shot was punched over the crossbar by goalkeeper Francis Uzoho.

Peseiro’s side had their first scoring opportunity in the sixth minute, albeit, Osimhen headed Calvin Bassey’s cross wide. And in the 11th minute, the Nigerian team was punished for the waste after Sierra Leone capitalised on a disjointed defending by the home team to take an unexpected with Jonathan Morsay beating Uzoho from close range after he was teed up by Musa Kamara.

That lead lasted for just five minutes as Iwobi restored parity for the three-time African champions. After being teed up by Moses Simon, the Everton man danced into the Leone Stars’ defence before slotting the ball past goalkeeper Mohamed Kamara.

Having spent much of the first half on the back foot, Nigeria looked reinvigorated towards the halftime break, and they got their reward Osimhen found the net thanks to a second assist from Simon.

In the 51st minute, Villarreal winger missed a sitter with just the goalkeeper to beat after collecting a fine pass from Napoli goal machine Osimhen.

Even with the introduction of Amadou Bakayoko, Mustapha Bundu, and Augustus Kargbo, Sierra Leone could not find their way back and they returned home with heads bowed low.

Thanks to this result, the 2013 African kings occupy the summit of Group A with three points. They continue their bid towards qualifying for Cote d’Ivoire 2023 with an away fixture against Sao Tome and Principe on Monday at the Stade Adrar in Agadir.

For Keister’s men, they would be aiming to return to winning ways when they host Guinea-Bissau, who defeated Sao Tome and Principe 5-1 in their first match, on June 13.