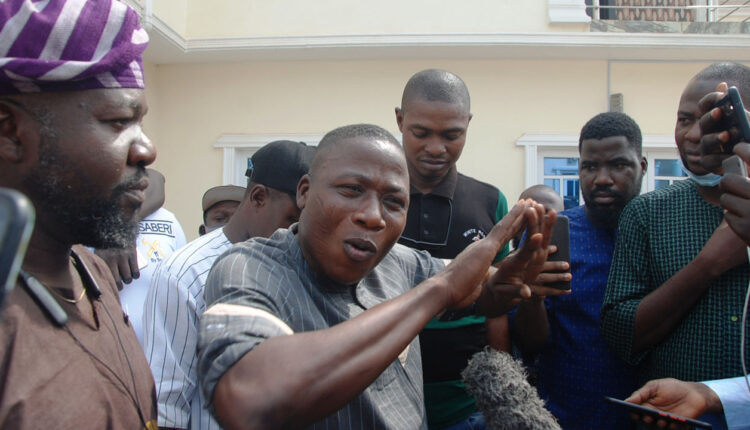 The Yoruba Nation agitator, Sunday Adeyemo popularly called Sunday Igboho, supporters were reported to have attacked the crew of Nigerian Television station, Arise TV, after the court in Republic of Benin ruled that the activist should be remanded pending the outcome of ongoing investigations by security agencies.

As gathered, the Cour D’Appel De Cotonou also ruled that the Yoruba Nation leader should be transferred to another detention facility that would allow him to have access to better treatments while in detention.

The outcome of the over 10 hours court proceeding, The Guild learnt, did not go down well with the supporters that were earlier dispersed from the court premises by the country’s law enforcement agency.

After the court proceedings yesterday, the supporters were said to have vented their anger on the TV crew including the reporter, cameraman, as well as driver, and were beaten by the activist supporters while the camera was stolen.

A staff of the TV station disclosed that the camera was yet to be retrieved from the activist even after the crew pleaded to the supporters, who were said to be angry over the court outcome, that they were in the country to report activities.

Earlier, the West African nation had relaxed security around Sunday Igboho, removing the leg chains and handcuff as well as granted his wife, Ropo, access to meet him thrice daily.

Also, the government approved the request of Sunday Igboho’s legal team that the suspect should be allowed to undergo a medical checkup and that it should be done by his personal physician.
The approval was confirmed by his legal team through a statement released by Communications Manager, Ilana Omo Oodua (IOO), Maxwell Adeleye, and made available to newsmen on Monday.
They, meanwhile, stressed that Sunday Igboho was not under any immigration-related probe in Benin Republic and that all the activists was been queried and arraigned for were that he was allegedly buying and stockpiling ammunition as well as inciting Nigerians against the government.
The statement reads in part: “We urge supporters from Nigeria not to bother coming to the court premises in Bénin. Kindly stay in Nigeria and support with prayers and whatever you can do within the ambit of the law. We are confident that Chief Igboho shall be set free”.

Over 1M Nigerians register online for voters’ card ahead 2023

JUST IN: Lagos traffic radio to shut down transmission