LASG urges residents to respond to SMS on stimulus food… 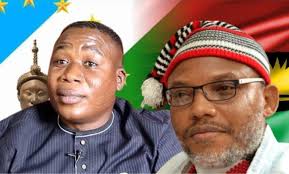 Last weekend was not too good for any sane Nigerian. A state high court in Ibadan, Oyo State capital, had awarded N20 billion against the Federal Government in favour of ‘Yoruba Nation’ agitator, Sunday Igboho, as compensation for the raid on his home by joint security operatives, following intelligence that he was stockpiling arms to – in no distant time – unleash mayhem on the South West of Nigeria.

In the same vein, a high court in Umuahia, Abia State, did its own. The judge reportedly gave a judgement, which ordered the Federal Government to pay confirmed terrorist Indigenous People of Biafra (IPOB) leader, Nnamdi Kanu, N5 billion for same reason.

Recall that Nnamdi Kanu, whose IPOB had since been proscribed and declared by competent court as a terrorist organisation, has been responsible for the insecurity in the South East of Nigeria, killing – by ambush – Army officers and soldiers, murdering police and DSS personnel, innocent citizens and setting police stations on fire as well as destroying other public infrastructures including those as belong to the Independent National Electoral Commission (INEC).

Nnamdi Kanu, undisputably, became the founder of modern day fake news manufacturing with the use of his Radio Biafra, social media especially the Twitter. Sadly, he was so supported by Twitter that the American social media platform treated his crisis brewing text and video posts as sacrozanct while deleting posts of contrary views, either by Federal Government or individual country men and women.

Due to these attitudes of Kanu and Twitter, many lives had been lost, military and other security agencies had been caused huge losses in terms of personnel and security infrastructures. These happened, just like through the many ethnic and religious conflicts they caused, many innocent Nigerians had either died or become homeless, widows and orphans across camps as Internally Displaced Persons (IDPs).

This same fellow, who believes that Nigeria is a zoo and has formed a paramilitary organisation, Eastern Security Network (ESN), to kill its citizens – either through so called #EndSARS activities or Sit-at-Home enforcements, was helped to secure a bail on health ground by mainly an opposition Peoples Democratic Party (PDP) Senator Eyinnaya Abaribe, who went ahead to further help him breach the bail conditions, by escaping to the United Kingdom (UK).

He had shuttled between UK, Israel, Europe and United States of America, causing embarrassments for the same Igbo tribe he claims to “liberate” and issuing various orders and untrue information through his social media accounts and he was believed. The offshoots of these evil misinformation and satanic orders have great impacts in the killings and kidnappings across regions of the country today.

Many of those that believed him would commit the crimes and present their details and identities behind the phones as Fulani herdsmen, thereby escalating, unnecessarily, long existing farmers/herders clashes into an almost unexplainable crisis situation that almost set the whole Nigeria on fire.

More sadly, a new group self-styled ‘Yoruba Nation’ emerged in Yoruba speaking South West region, purposely lending collaborative support to the insecurity agents that IPOB represents in the South East. Its leadership and membership hid under agitation for Oduduwa Republic to do this. The group, although not as monsterous as IPOB (South East) and Boko Haram/ISWAP (North East), has a ‘professor’ in Banji Adetoye as founder and PDP’s leading thug, Sunday Adeyemo a.k.a. Sunday Igboho as leader of its militant force called “the Yoruba warriors’.

Igboho set out with claims that Fulani herdsmen were the kidnappers and killers of particularly Ibadan politician, AbdulFatai Aborode, America-based Edo born Prince Dennis Abuda, both killed after kidnap, and the Ekiti oil and gas magnate, Sulaiman Akinbami, who was later released from kidnappers’ den.

Although Twitter and Facebook helped the Igboho cause, like they did to Nnamdi Kanu, which made almost all Southerners believe that those kidnapping and killing in the South West and South East states’ bushes were Fulani herdsmen, truths later emerged that, whereas there were elements of Fulani tribes like no tribe or religion does not have its own bad eggs, those kidnappers and killers of the Southern people were largely their fellow tribesmen, as it turned out to be. Akinbami granted an interview to Punch and declared, unequivocally, that those that kidnapped him were his fellow Yoruba people. Arrest by police of killers of Abuda in Edo showed they were the usual Edo criminals as it were. Case closed.

But before the case could close, Sunday Igboho, overreacting, had invaded Fulani settlements in Yoruba Land, from Ibarapa in Oyo State to Abeokuta and up to Idiroko, the Nigeria’s border with Republic of Benin, where he issued quit notice to them and upon expiration of same returned, killing the Fulani people, setting their property on fire, rustling their cows and forcing the Sariki Fulani of Oyo State, Alhaji Salihu Kabiru, out of the Yoruba Land community after killing his only brother of same blood. He is now in Kwara State, saying “Any time I hear Igboho, my heart trembles’ with deep fear.” Sariki Kabiru told BBC in a video reported.

An Osun Senator, widely reported, had also revealed that some of the traditional rulers in the South West region would send kidnappers after fellow tribesmen to make money. Police arrests of kidnappers along Shagamu-Ore bushes showed that those in the crimes were more of Southerners – either bad eggs among Igbo, Yoruba or mixture of both, who were committing those atrocities.

There was particular case of a family of seven arrested in a bush within Shagamu and Ore axis, who had a farm land on which they carried out their kidnapping operations against travelers. Police arrest showed this and they were non-Fulani people from a world led by Nnamdi Kanu.

No one has exonerated bad eggs among Fulani tribesmen from being culprits but the two guys that kidnapped four schoolgirls in Ghana, killing the four of them, the leader had presented himself as Mohammed Abu and as herdsman in Nigeria until, after arrest by Ghanaian police, his international passport was found and he was discovered to be neither a Muslim nor Fulani. Yet, these were reasons adduced by Nnamdi Kanu and Sunday Igboho for their violence in South East and South West targeting members of a particular tribe and region.

Alas! Some courts in both regions, despite seeing all of the terroristic crimes committed, would still go ahead and issue orders to compel the Federal Government – that was only acting based on the Constitution to provide security and safety for the innocent citizens against these identified tribalist criminals, though allegedly – to pay them compensation as huge as N20 billion (for Igboho) and N5 billion (for Kanu).

What does that mean? It means that it pays to choose crime as a trade and that, the more terroristic or monsterous one can become, the higher the compensation he gets with the aid of ‘court’. WHICH COURT IN NIGERIA WOULD DO THAT? AND WHY?

My findings showed to me that the courts are in states controlled by opposition politicians. For example; Oyo State and Abia State and each of those states have fully and officially supported the terrorist behaviours. Conscious of these official supports, the terrorists go to courts controlled by those governments having sympathy for them and threaten the judges to give them such kangaroo judgements or injunctions or they get killed with their families and properties destroyed, hence what happened.

In that case, Nigeria’s higher authorities will therefore need to rescue the land from the destroyers, who are using judiciary of opposition states to do their biddings, and good enough, the Attorney General of the Federation and Minister of Justice, Malam Abubakar Malami (SAN), has promised to appeal those ‘satanic’ judgements. It saves our day.

My advice to the Department of State Services (DSS), police and the Army is for them not to be despaired by some supposed courts and state governments’ support for those that kill their officers and personnel as well as killing other innocent Nigerians and plotting to collapse the country they stake their lives to secure, protect and defend. Those satanic efforts are bound to fail. They have been failing and will continue to fail, shamefully too.