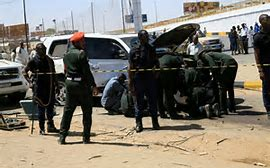 The Sudanese Government has confirmed that its Prime Minister, Abdalla Hamdok, who’s convoy was attacked at the early hours of the day, survived the assassination attempt and has no plans to back down from reform programs being implemented by his administration in the country.

It stated that the attack, which was alleged to have been aimed at assassinating the prime minister, was unsuccessful and that Sudanese leader and his convoy had been left largely unhurt by the experience.

The Minister of Information, Faisal Salih, revealed that a comprehensive investigation had been launched into the attack and that the government would leave no stone unturned to get to the bottom of the incident.

Speaking to newsmen in the country, on Monday, Salih lamented such a grievious occurence and said that such an attack was not simply on the person of the prime minister, but was also a direct attack to the Sudanese revolution and to a new wave of positive change in the country.

He reiterated that such threats could not stop the prime minister’s resolve to fully implement his economic reform programs as they were aimed at benefitting the people of Sudan, as well as helping the country gain firmer economic footing.

It would be recalled that Sudan, which had been under years of military rule, came under a power sharing agreement between civillian and military governments in a transitional period that had, however, culminated in the ousting of ex-President Omar El-Bashir by country wide citizen protests.

According to a source at the civillian coalition which had been behind the protests that ousted Bashir, the Monday attack was just one among several recent attempts at assassinating the former senior United Nations official, Hamdok.

Leading member of the coalition, Khalid Omer, who decried the incident, described it as “the new episode in the series of coup plots against the revolution”, and urged  the government to get to find out those who were responsible for the attack.

The Guild gathered that the Monday attack triggered further rallies, protests and displays of unity in support of the prime minister by citizens and residents of the country with aim to protest such assassination attempts and to demonstrate their loyalty for and preference of civillian rule in Sudan.