Hijab as red meat of bigotry 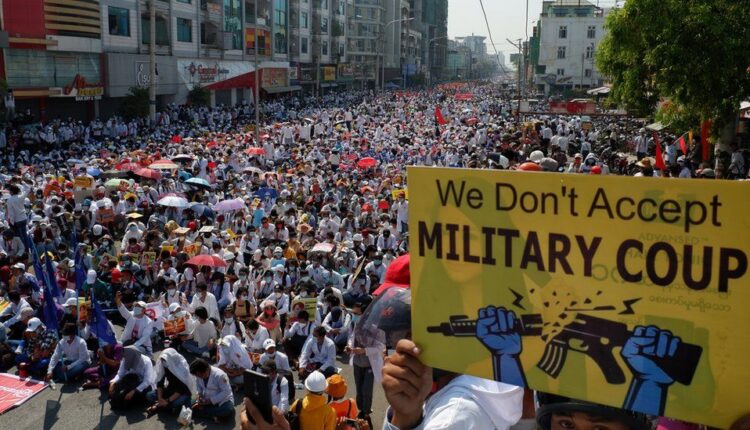 Two protesters were on Monday killed by gunshot wounds sustained from police stray bullets during an attempt to repress demonstrators protesting against Myanmar’s military rulers.

As gathered, the development forced shops, factories, and banks were closed in the main city of Yangon as part of the uprising against the country’s military rulers.

It was learnt that the bodies of the two men lying on the street in the northern town of Myitkyina and that they were taking part in a protest when police fired stun grenades and tear gas. Several people were then hit by gunfire from buildings nearby.

One witness, who said he helped move the bodies, told journalists that two people were shot in the head and died on the spot and that three people were injured.

“How inhumane to kill unarmed civilians,” said the witness, a 20-year-old man. “We must have our right to protest peacefully.”

It was not immediately clear who fired on the protesters although both police and the military were at the protest, the witnesses said.

Police and military have allegedly killed more than 50 people to quell daily demonstrations and strikes against the Feb. 1 coup, according to the United Nations last week.

Crowds demonstrating against the coup gathered in Yangon as well as the second-biggest city, Mandalay, and several other towns, according to videos posted on Facebook. Protesters in Dawei, a coastal town in the south, were protected by the Karen National Union, an ethnic armed group engaged in a long-running war with the military.

Protesters waved flags fashioned from htamain (women’s sarongs) in some places or hung them up on lines across the street to mark International Women’s Day while denouncing the junta. Walking beneath women’s sarongs is traditionally considered bad luck for men and tends to slow down police and soldiers.

According to sources, security forces were keeping a presence at hospitals and universities as part of efforts to enforce the law.

At least nine unions covering sectors including construction, agriculture, and manufacturing have called on “all Myanmar people” to stop work to reverse the coup and restore Aung San Suu Kyi’s elected government.

Allowing business and economic activity to continue would help the military “as they repress the energy of the Myanmar people”, the unions said in a statement.

“The time to take action in defence of our democracy is now.”