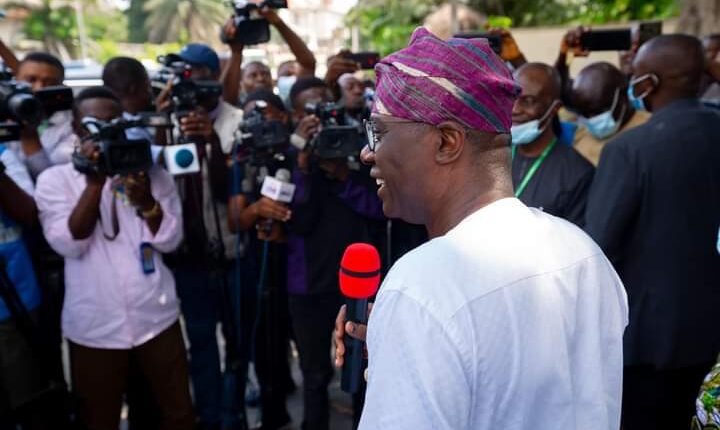 Ahead of next Monday’s hearing on the cases brought against Yoruba Nation agitator, Sunday Adeyemo popularly called Sunday Igboho, the Lagos State Governor, Babajide Sanwo-Olu, has said that some people were currently working behind the scene on the issue to resolve it before it escalates.

Sanwo-Olu said that they have decided to work behind the scene in order to achieve the desired result for the Yoruba Nation agitator who was currently been held by the Republic of Benin security agencies for various crimes.

The Governor disclosed these while addressing pressmen after casting his vote at the Polling Unit 019 Ward 08, Ikoyi II with his wife, Ibijoke, during the chairmanship and councillorship elections for the 57 Local Government and Local Council Development Area (LCDA) on Saturday.

He disclosed the work been done behind the scene after speaking on the importance of the council election to democracy and the plans his administration has for the development of Lagos.

His response: “These are very difficult times for all of us. I can assure you that people are working behind the scenes. On occasions like this, it’s not by how many Press people you call. I’m aware that a lot of people have responses that they are doing quietly and privately and it doesn’t have to be a public conversation.”

Meanwhile, ollowing the low turnout recorded across Lagos during the council elections, he promised that the State would increase voters’ education and enlightenment to ensure a robust participatory democracy across the state.

Sanwo-Olu noted that the turnout discovered at some of the polling units he observed does not represent the importance of the election which he described as the closest to the people in Lagos.

He stated that although people were seen in queues waiting to exercise their rights, the turnout for the local government elections could have been better considering the impact of the council on community developments.

While arguing that the beauty of democracy was for people to elect their representatives through a free and fair electoral process, the governor stressed that the exercise was peaceful.

“This is about the only time when we can express ourselves freely and openly. Talking about the low percentage of voters, it is a reflection of society. We need to encourage more participation and increase advocacy for the citizens. All the infrastructure and logistics have been provided by the Government. It is really for our citizens to come up and express themselves. So, it is work in progress; that is the beauty of democracy.

“For some other countries that we follow, they have been on it for over 200 years and you will see that there is never an election where you have 100 percent but you continue to improve on the advocacy and everybody has a role to play. This is another clarion call for our people to come out and express themselves willingly,” the governor said.

On his administration’s plan for development, Sanwo-Olu stated that the recently upgraded and rehabilitated network of roads, comprising Thompson Avenue, Milverton Road, MacDonald, and Lateef Jakande Road in Ikoyi, Eti-Osa Local Government Area, stating that action of the government was a reflection of what is happening in all our local government areas in Lagos State.

“We are doing construction works everywhere in Lagos State. What you see here (Lateef Jakande Road) is a reflection of what is happening in all our local government areas. As you observed, two years ago, this particular road, Lateef Jakande was not like this and now it is wearing a new look. We are doing same thing in all our local governments and other places in Lagos State. I believe that the whole idea around governance is to improve and make life better for our citizens,” he said.