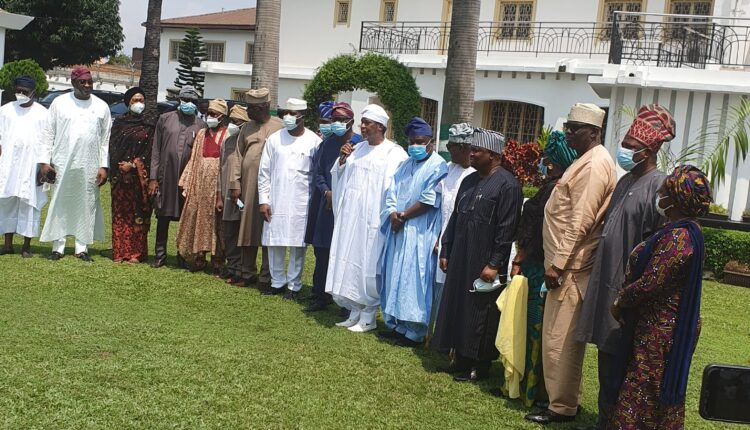 The lawmakers representing the six Southwest states in the Senate have assessed impact of violence and destruction of public and private facilities that trailed the EndSARS protest in Lagos State and recommended that the Federal Government should intervene in procurement and reconstruction of damaged facilities in the state.

They said that the destruction of public and private facilities in Lagos was massive and that the financial implication was huge for the state to bear considering the current global economic challenges.

The senators, who sighed endlessly as they were shown pictorial evidence of destruction perpetrated after the protest was hijacked after Lekki shooting, described the attack as coordinated destruction of public and private properties in Lagos.

They made the recommendation during a visit to Lagos State Governor, Babajide Sanwo-Olu, at the State House in Marina, to commiserate with him after the attack that claimed lives and resulted in property vandalism across Lagos.

The delegation of the Southwest caucus in the Senate led by Ajayi Boroffice, assured the governor that the Southwest senate caucus would be meeting with leadership of the National Assembly to prevail on Federal Government towards assisting the State to recover and rebuild the affected facilities.

Boroface said the caucus would move a motion that would enable the Ministry of Foreign Affairs to catalogue the ugly images from the destruction and send to Nigerian embassies overseas for those in the Diaspora to see proportion of damage wreaked.

He said: “We are concerned about the gravity of the damage on public properties in Lagos and other places across the country. We will be moving a motion in the Senate to urge the Federal Government to come with assistance to Lagos State, because the burden of the destruction is too much for Lagos to bear alone.”

Aside from the intervention, Boroffice, who represents Ondo North, wondered why the youth protest was prolonged and allowed to degenerate to violence when the Federal Government had agreed to the five-point demands of the protesters.

The lawmaker, who demanded that the tragedy be thoroughly investigated, expressed worry that many youths working in the businesses that were destroyed would be rendered jobless, adding that it would take time for the owners of the businesses to recover, given the extent of loss.

“Members of the Southwest caucus in the Senate is here to console you over the demonic violence unleashed on Lagos. Government and private individuals suffered an incalculable loss in the unfortunate destruction that trailed the EndSARS protest. No Nigerian is against peaceful protest, but a demonstration that does not have a leadership will encourage hoodlums to hijack and wreak havoc.

“Adequate decision had been taken by the Government to attend to the demands of the protesters. Of course, some of the demands require a constitutional amendment and cannot be done immediately. The Senate showed its readiness to look into the issues with the necessary amendments. So, it was unnecessary for the protest to be prolonged to the point of being hijacked by those with violent agenda,” he added.

Sanwo-Olu thanked the lawmakers for showing solidarity, saying that law-abiding residents had suffered from the violence and borne the brunt in a harsh way.

The Governor expressed concern that some Lagos communities are now vulnerable to crimes, following the arsonist attacks on police stations and facilities housing security operatives.

He, again, condemned the shooting of protesters at the Lekki Toll Plaza by soldiers, insisting that until after a thorough investigation, no one would know how many lives were lost in the incident as against misinformation spread in the social media, which gave conflicting figure of deaths.

Sanwo-Olu said the two bodies found on the roads on Admiralty Road and Victoria Island had no link with Lekki shooting, adding that most of those who were injured in the incident had been treated and discharged.

The Governor reiterated his commitment to thorough investigation into the violence and the shooting of protesters by soldiers. He said findings of the investigative panel would be forwarded to relevant authorities for actions.