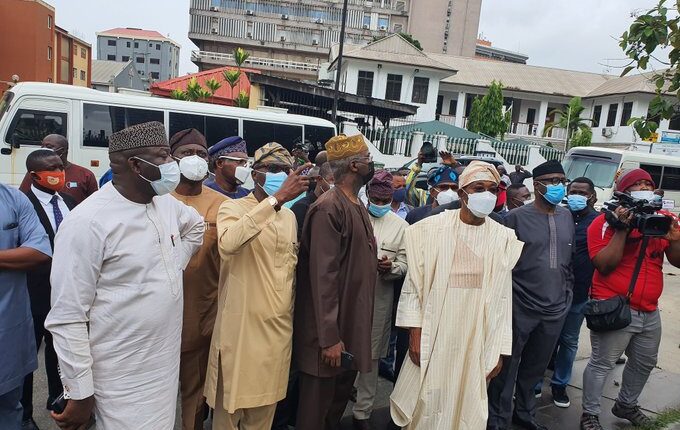 Barely five days after military personnel attacked EndSARS protesters at Lekki tollgate, the Southwest Governors have recommended that the actions of the military and other activities that transpired at the Admiralty Toll Plaza as well as violence that spread across the state that resulted in loss of lives and property in Lagos State be investigated.

The governors, while describing the loss of lives and property as massive, added that what transpired after the shooting at Lekki tollgate further exposed the intention behind all that had occurred in southwest states, especially Lagos State.

They gave the recommendations on Sunday after Lagos State Governor, Babajide Sanwo-Olu led the governors and ministers to inspect scenes of the Lekki shooting and public facilities vandalised across the state.

Those present include; Governor Rotimi Akeredolu of Ondo, Governor Kayode Fayemi of Ekiti, and Governor Seyi Makinde of Oyo state, the Minister of the Interior; Rauf Aregbesola, Minister of Power and Housing; Babatunde Fashola, the Minister of State for Health; Olorunmibe Mamowora, and the Minister of Industry, Trade, and Investment; Niyi Adebayo.

Others present were during the visit include Minister of Youth and Sports Development; Sunday Dare, and his counterpart from ministry of Mines and Steel, Olamilekan Adebite.

Addressing pressmen after the tour, Chairman, South West Governor’s Forum, Akeredolu, stated that the jungle justice perpetrated during the crisis raises suspicion on the motive of the arsonist and vandals in the state.

“Consequently, we insist that full investigation be conducted to ascertain the veracity of the news items liberally circulated by some local media. It is becoming very clear that the conflagration may have been caused by deliberate deployment of a weapon of mass confusion” apology to Dr. Ope Banwo. The attendant damage was extensive and massive.

“The selective application of jungle justice raises suspicion as regards the real motive of the arsonists and vandals. We use this medium to appeal to the youth, especially those of South West extraction, to be circumspect lest they lend themselves to the evil schemes of those who want to destroy our land.

“The protests started off as genuine, demanding reform and restitution. The current happenings across the South West, especially Lagos State, have exposed dubiousness and complicity evidencing malice afore-thought”, he added.

The governor, however, appealed to leaders of the communities and youths to rise up and defend the southwest from the external invaders that were hellbent on destroying heritage of the region.

According to him, we enjoin our youth and communities to rise up to defend our land and people against the diabolical incursions ravaging our space. What do we stand to gain destroying ourselves.

“We cannot continue to fold our hands and watch our heritage destroyed and our people Suffer. We must engage, constructively, all those whose dubious solutions to a social problem is the descent to anarchy. We appeal that they should calm down”.