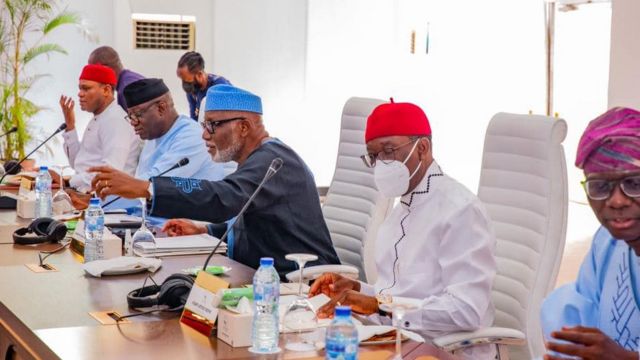 Governors across 17 states in Nigerian Southern region have insisted that President Muhammadu Buhari’s successor must emerge from the South with the north having completed eight years tenure, saying the move would cement desired equity and fairness across the country and put out fire of several agitations for secession and other grievances.

Aside from insisting on presidency zoning to the region, the governors also throw their weight behind the collection of Value Added Tax (VAT) by State Governments as against the current arrangement where the Federal Government through Federal Inland Revenue Service (FIRS) was collecting the revenue on behalf of states.

They stated that the support had become imperative to ensure the country achieve true fiscal federalism such that would spur ingenious ideas from leaders that would set development roadmaps for every state in their areas of comparative advantage.

Giving the governors’ position while reading their resolutions shortly after the meeting which held in Enugu State on Thursday, the Chairman of the Southern Governors Forum (SGF) Rotimi Akeredolu (SAN), said that since collection of VAT falls within powers of the state, it was important the state governments take the mantle and begin collection of the tax with immediate effect.

Akeredolu, who doubled as the Ondo State Governor, in the seven-point communiqué, said that the governors were satisfied with the rate at which the states were enacting and amending the anti-open grazing laws, in line with the uniform template and aspiration of the Forum.

Furthermore, he tasked the governors that were yet to enact the anti-open grazing law to do so without much delay, adding that such would augment the collective resolve of the forum to drive the needed change and protect the citizens of their respective states.

The communiqué read in part, “the Southern Governors Forum expressed satisfaction with the rate at which the states in southern Nigeria are enacting or amending the anti-open grazing laws, which align with the uniform template and aspiration of Southern Governors and encouraged the states that are yet to enact this law to do so expeditiously.

“We also encourage the full operationalisation of already agreed regional security outfits, which would meet, share intelligence and collaborate to ensure the security and safety of the region.

“The Forum reaffirms its earlier commitment to fiscal federalism as resolved at the inaugural meeting of the Forum held on Tuesday, May 11, 2021, at Asaba, Delta State and emphasised the need for the Southern States to leverage the legislative competence of their respective State Houses of Assembly, as well as representation in the National Assembly to pursue its inclusion in the Nigerian Constitution through the ongoing constitutional amendment.

“The meeting resolved to support the position that the collection of VAT falls within the powers of the states. It also expresses satisfaction with the handling of issues around the Petroleum Industry Act and ownership of Nigerian National Petroleum Corporation by the larger Nigerian Governors’ Forum.”

The Forum also reiterated their earlier position that the next president of Nigeria must come from the southern part of Nigeria, in line with the politics of equity, justice and fairness.