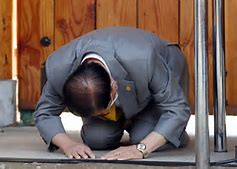 The South Korean Government has revealed that it is set to indict leaders of the Shincheonji Church of Jesus for murder, over spread of coronavirus and consequent death of over 25 persons who had been infected with the disease in the country.

It stated that the indictment considered role of the church and its leadership in entrance and spread of the novel virus within the countries borders and that it also sought to enforce accountability on the part of the church leadership and make them take responsibility for deaths that occured from coronavirus in the country.

The government had explained that in January some members of the church had visited the Chinese city of Wuhan, where the disease emerged late last year,  and having returned, later began showing syptoms of the viral infection, which it alleged was not properly contained, hence the spread to hundreds of people from the church.

Speaking to newsmen through the National Health Commission Spokesperson Mi Feng, who reported 599 new cases of coronavirus infection, which took the national tally to 4,335, explained that 377 of the new cases were from the southeastern city of Daegu which was home to a branch of the Shincheonji Church of Jesus, where most of South Korea’s cases have traced from.

Feng reiterated that leadership of the church had been negligent in reporting the cases of coronavirus, leaving it off till it was late and many others had been infected by their members, and stating that they should be punished for their negligence.

He urged prosecutors to launch a murder investigation against the Shincheonji Church leader, Lee Man-hee, stating that if the leadership had cooperated fully with the government preventive measures could have saved the people that died, and added that blame for such deaths, therefore, were to be laid at the church leadership’s door.

“The situation is this serious and urgent, but where are the leaders of the Shincheonji, including Lee Man-hee, the chief director of this crisis?”

“A criminal complaint has been filed asking for the investigation of Lee and 12 others on charges of murder and disease control violations”.

In his response, Leader of the Shincheonji Church of Jesus, Lee Man-hee apologized on Monday that one of his members had infected many others with what he described as a “great calamity” and explained that the church had made unsuscessful efforts to contain the disease initially before its public break out.

Man-hee expressed deep sadness at the situation and offered apology to South Koreans for the part his churc had played in the spread corona virus in the country.

“We did our best but was not able to stop the spread of the virus, it was by no means intentional. We ask for the forgiveness of the Government and good people of South Korea and pray that this endemic will soon be over”.