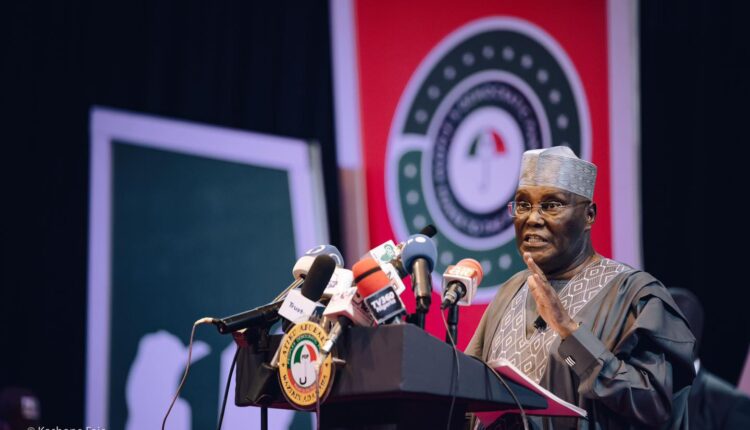 Share
The People Democratic Party (PDP) Presidential Candidate, Atiku Abubakar, has claimed that people of the Southeast and the zone are dear to his heart due to positive roles they played in his political life, supporting him through thick and thin, the favors he said he can never forget.
Atiku disclosed that he is indebted to the zone through its sons and daughters that have continued to play critical roles in the growth and development of Nigeria over the years.
The Vice-Presidential noted that aside from that, the sons and daughters of the zone have continuously been important values to the PDP government in which he served as vice president for eight years.
He indicated that any government that aimed to revive the Nigerian economy and provide employment opportunities for its people must carry the Southeast along in its policies and programs, as the region remain key to the country’s success.

The PDP presidential candidate, who made the claim on Tuesday during a meeting with leaders and stakeholders of the Southeast zone of the PDP in Enugu state, argued that what had often affected the potential of the region to achieve more had been the lack of infrastructure to exhume the ingenuity among youths in the region,

Atiku assured the people that his administration if elected, would help restore the region to its prime place and stop all activities that had continued to impoverish them including the Monday-sit-at-home order often imposed by the Indigenous People of Biafra (IPOB) members across the region.

He noted that the agitation of IPOB members had been that the region was marginalised but when the administration,  all that was causing marginalisation would be addressed through restructuring and devolution of power to the regions and state, so as to function without absolutely depending on the central government for any major projects, policies, and programme.

“As you know, the South East is close to my heart. You have supported me through thick and thin and I will always remember that. Your sons and daughters have played very positive roles in the development of our country, They were key personnel who played important roles in the PDP government in which I served as Vice President”.
“And they have continued to excel in other roles across the world. You are a key contributor to economic activities in this country and a government that wants to revive our economy and provide opportunities for our people must carry the South East along.
“I am a businessman and I know that businesses need a supportive environment to thrive and when they thrive the country thrives. I do not see the provision of infrastructure in any part of the country as a favour to that part. If anything, it is a favour to the country because we are one country, one economy.
“A bridge across the River Niger or a coal power plant in Enugu is a favour to the Nigerian economy because they will contribute to growth in economic activities not just in the southeast but across the country.   We do not require identity cards from people and goods crossing a bridge, and electric power does not carry ethnic or religious currents when they pass low or high-tension cables.
When you understand the importance of infrastructure for economic development, jobs, and wealth creation your focus would be to provide as much infrastructure as is needed in every part of the country rather than treat it as favours to be bestowed on those you like and denied to those you dislike.
“My dear friends, this agenda will benefit the southeast. A Nigeria that truly works will work for all its zones.  We must tackle the feeling of marginalization which is providing an excuse for the separatist agitations in this zone. National unity will benefit the people of this zone who need a wider platform to operate on.  Restructuring that devolves powers from the federal government and gives states the power to set their priorities is better for this zone than what we currently have and have had since the late 1960s.
“I believe that you should not pull back one of your child that appears to be doing better at some point so that your other children would catch up. Rather you encourage the one lagging behind to emulate that one so they can all do better. Holding the faster one back would result in all of them falling behind and handing victory to children who are not from your family.
“Also, insecurity pervades the South East now as much as other zones and without security people cannot go about their normal businesses. I am aware of how the economy of this zone and the livelihoods of its people are being destroyed by the Monday sit-at-home being imposed by a small misguided youth from this zone. It is difficult to understand how you liberate a people by destroying their economy.
“This has to stop and we shall address all political grievances not just by words but by deeds. The provision of Infrastructure is provisioning is critical for businesses and economic growth in the region, including necessary linkages across the country. Improved education is critical for this zone and the country. So is good quality health care”.