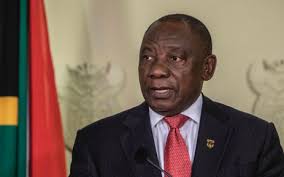 The South African Government has disclosed that its President, Cyril Ramaphosa, has testes negative to the deadly coronavirus pandemic which has run course through several countries around the world.

It said that the president had been tested due to the fact that he had held meetings with many people from different nations and varied walks of life, and that medical experts had therefore advised that the test be conducted as a precautionary measure.

The presidency revealed that, following such advice, Ramaphosa had recently submitted himself for testing, result of which had come back negative.

Speaking through a statement released to pressmen in the country on Thursday, it reiterated that the decision to test was as precaution and that the president had never shown any symptoms of the dreaded viral disease.

It urged South-Africans to stay safe and observe all medically advised preventive measures, adding that the government were on top of the situation to curb, as much as possible, spread of the viral infection.

“The president submitted for testing as a precautionary measure upon the advice of physicians on Tuesday 24th March 2020 and received his results last night. They were negative and he has been certified freee from coronavirus”.

How to keep fit at home following Lagos gyms closure