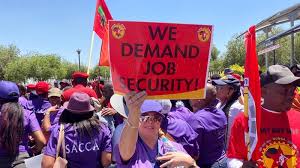 South African Airways (SAA) has nearly no cash left and may miss salary payments this month, a board member said on Wednesday, as a crippling six-day strike has pushed the state-owned airline to the brink of financial collapse.

The standoff between SAA and two of its largest unions over wages and job cuts is a critical test of President Cyril Ramaphosa’s pledge to fix ailing state firms, which play a large role in Africa’s most industrialized economy.

But the government has few easy options to rescue SAA. The airline has received more than 20 billion rand ($1.35 billion) in bailouts over the past three years and is hobbled by an unprofitable route network and a fleet of inefficient planes.

Officials have said they want to stabilize SAA before selling an equity stake so that they can get a better price.

But the rapidity of SAA’s financial slide and ballooning state budget deficits mean the government’s commitment to salvaging the airline is being sorely tested.

SAA board member Martin Kingston told Reuters the strike was costing the airline a minimum of 50 million rand ($3.4 million) a day and that, without additional state guarantees, the board could have to recommend that the company be liquidated.

“We may not have enough cash to pay salaries at the end of the month. We are still investigating how we can do that,” he said. “This is a real-time discussion we are having with National Treasury and the Department of Public Enterprises. We need help imminently.”

Compounding the cash squeeze, the National Union of Metalworkers of South Africa (NUMSA) and South African Cabin Crew Association (SACCA) called the strike last week after SAA refused their demand for an 8% salary hike and said it planned to cut almost 20% of employees.

SAA offered a 5.9% increase. Another large union, the National Transport Movement, is considering whether to accept that offer.

NUMSA’s spokeswoman Phakamile Hlubi-Majola said there would be “no surrender”.

NUMSA has issued catering firm Air Chefs, a subsidiary of SAA, with a letter of intent threatening a secondary strike and has secured a strike certificate over a separate issue at British Airways franchise partner Comair (COMJ.J).

SAA said it was resuming some flights from Johannesburg to Cape Town, Durban and Victoria Falls starting on Thursday, after earlier restarting flights to six other African cities and destinations outside Africa. It has canceled hundreds of flights since the strike started on Friday.