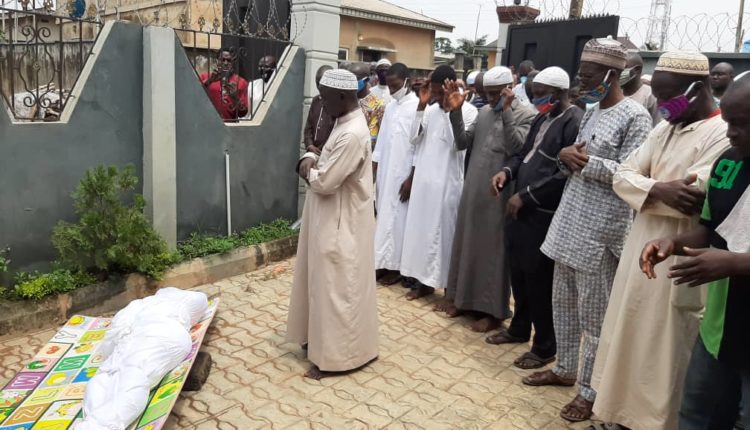 Rather than declaring a minute of silence in recognition of New Telegraph late Saturday Editor, Waheed Bakare reported to had passed away yesterday night after a brief illness, tears and tributes have continue raining from relatives, journalists and associates as the late Saturday editor’s body was laid to rest on Monday at his residence, in Ota, Ogun State.

Besides, colleagues who have had encounters with late Bakare expressed sadness on his demise and that the late editor would be missed.

Speaking at the burial rites for the late editor on Monday, the supervising cleric, Ustadh Ibraheem Ayyub, said though the deceased exit was painful to both the media industry and the religious society he belongs to, death remains the ultimate price to pay by all creatures.

Ayyub, who is the Chief Imam, Akorede Central Mosque, Abule Egba, based his homily on the need for people to reflect on their worldly dealings before the final exit noted that the worldly life is for a brief period, adding that there is a need for humans to be conscious of their dealing as the earth will be their final abode.

Quoting chapter 20 verse 55 of the Holy Quran which says, ‘From the earth did we create you, and into it shall we return you, and from it shall we bring you out once again’, argued that no matter the achievements of any individual on earth, death will always be the ultimate price.

He urged friends, family, and well-wishers present at the burial rites to pause and reflect on their worldly dealings and be conscious of the last day in which the only thing to intercede for them will be their deeds when they are alive.

However, President Muhammadu Buhari has commiserated with the media industry, particularly the Nigeria Union of Journalists and Nigeria Guild of Editors, over the passing of Bakare.

The President, while condoling the family of the deceased, and management of New Telegraph Newspapers, described the editor’s death as a collective loss to the media and the nation that he served passionately with his talent.

On his part, the Osun State Governor, Gboyega Oyetola, through a statement released to newsmen by his Chief Press Secretary, Ismail Omipidan, described the late editor as a hardworking, talented, cerebral and an accomplished journalist.

“I received with great shock the passing of Alhaji Waheed Bakare, Editor, Saturday New Telegraph. His death is not only a loss to his family, but also to the journalism profession. As people who believe in God, we should take it in good faith and give gratitude to God that the late journalist ran a good race and gave a good account of himself as a newsroom leader and gatekeeper.

“As a professional and a devout Muslim, Bakare showed class in the discharge of his responsibilities. My deep condolences go to the entire family, the New Telegraph management as well as the entire journalists in Nigeria. He will be sorely missed,” the statement read.

Also, the Muslim Media Practitioners of Nigeria (MMPN), while consoling the immediate family of the deceased, described the late editor as a thoroughbred Journalist, a devoted brother to his Islam, a humble and wonderful personality.

MMPN President, AbdurRahman Balogun, through a statement released to newsmen on Monday, said: “His death coming on the Sallah day is quite painful to us as a group but we are consoled that he died as a believer and a committed Muslim.”

Reacting to the incident, the Muslim Students’ Society of Nigeria (MSSN) in Lagos State, described the death as a monumental loss for the Nigerian Muslim community, media industry, and young media professionals.

The Amir (President) MSSNLagos, Saheed Ashafa, through a statement released to newsmen on Monday, said the deceased played a potent role in mentorship, sponsorship, and training of young Muslims and aspiring media professionals, some of whom have become “giants” in the media industry.

“MSSN Lagos and a lot of young media professionals just cannot forget Mr. Waheed Bakare in a hurry. We are all beneficiaries of his vast and profound knowledge and professional media expertise.

“He trained our members on several occasions. He mentored and sponsored a number of our members for media programmes. He was indeed a great achiever,” he said.