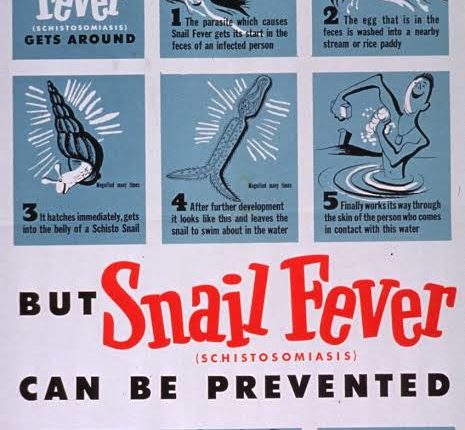 Residents of no fewer than seven Local Governments in Lagos State are currently battling with snail fever.

Snail fever also know as Schistosomiasis has been declared endemic by the State Government in the seven councils including, Ikeja, Ifako-Ijaiye, Amuwo-Odofin, Oshodi-Isolo, Agege, Lagos Mainland and Alimosho.

The State Government disclosed that health workers, as a form of control, will be deployed to schools, homes and other important places especially within the endemic councils to administer on children between ages five and 14, beginning from Monday 2nd to Sunday, 8th December 2019.

According to the government, parents and guardians should ensure that their children and wards eat well before taking the drugs.

Commissioner for Health, Prof. Akin Abayomi, who disclosed these to newsmen during a press briefing held at his office, described it as a neglected tropical disease because of the slow reactive nature.

He noted that the administration of medicines for control of the disease during the weeklong campaign would be carried out by the State government in collaboration with the Federal Ministry of Health, World Health Organisation (WHO) and Mission to Save the Helpless (MITOSATH).

The Commissioner, on Sunday, explained that the disease was often caused by parasitic flatworms called schistosomes and acquired when people come into contact with fresh-water infested with the larval forms of flatworms adding that the microscopic adult worms live in the veins draining the urinary tract and intestines.

Abayomi further stated that most of the eggs laid are trapped in the tissues and the body’s reaction to them can cause massive damage.

He listed symptoms of the disease to include abdominal pain, diarrhoea, bloody stool, or blood in the urine with the possibility of death in the case of chronic schistosomiasis.

The Commissioner said that neglected diseases such as Schistosomiasis causes significant implications for the wellness and wellbeing of the society and the people noting that development in any society cannot be sustainable without maintaining the the health of its citizens.

“To eliminate the disease, interventions in the general hygiene of the environment, nutritional status and strengthening public health systems at both the primary and secondary healthcare level would be deployed”, he added.

He added that government has no excuse to side-line the diseases as simple interventions on general hygiene, nutritional status and other basic things put in place at the primary and secondary health facilities can eliminate the diseases.

“We have no excuse to neglect these diseases because simple interventions put in place can eliminate the pathogens. By taking care of our hygiene, nutritional status as well as putting simple things in place will go a long way in eradicating the disease. That is why the present administration has put in place the one health approach to achieve optimal health outcomes,” he added.

Earlier, Executive Director, Mission to Save the Helpless (MITOSATH), Dr Francesca Olamiju, said that the disease commonly affected school-age children who come into contact with it during their daily chores or at play in activities involving freshwater.

She said that from the mapping of the state, seven local government areas were shown to be endemic to schistosomiasis.

She appreciated the state for collaborating with MITOSATH to eliminate neglected disease in the state, and urged parents to cooperate with the caregivers by bringing their children for treatment.

Dr Olakunle Daramola, Director at the Federal Ministry of Health, said that public awareness and commitment to upscale hygiene would assist to eliminate neglected diseases, saying that disease-free society would catalyse development.