Why our administration prioritise citizen engagement –… 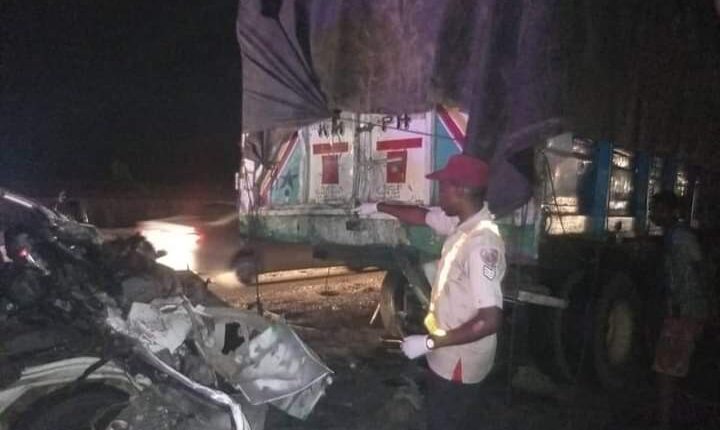 Share
No fewer than six passengers have been confirmed to have died and 12 others left with different degrees of injuries when the commercial bus conveying them collided with a truck along the Lagos-Ibadan expressway.
As gathered, the accident occurred at the ELANLAN construction end of the road at about 3:20 am when the passengers were leaving for their various destinations to celebrate the festival.
Confirming the casualties, Sector Commander, Federal Road Safety Corps (FRSC) in Ogun, Ahmed Umar, said that the causes of the crashes were road obstruction, excessive speed, and loss of control on the part of the trailer driver.
Umar, during an interview with newsmen in Abeokuta, the state capital on Saturday, explained that 12 people sustained varying degrees of injuries while six persons died.
According to him, two vehicles involved included a Toyota Hiace bus marked MK A567 XZ and an Iveco trailer with registration number XF 854 KTN.
The FRSC boss noted that the injured victims were taken to different hospitals, saying some were taken to Lagos State Accident and Emergency Unit, Ojota, some to Divine touch hospital, Ibafo and Olabisi Onabanjo University Teaching Hospital, Sagamu.
Umar stated that the deceased passengers were deposited at Idera Mortuary in Sagamu, adding a total sum of N127,900 was recovered from the crash scene and this is believed to be for the victims.
The sector commander, meanwhile, urged motorists to drive cautiously and always obey traffic rules and regulations.