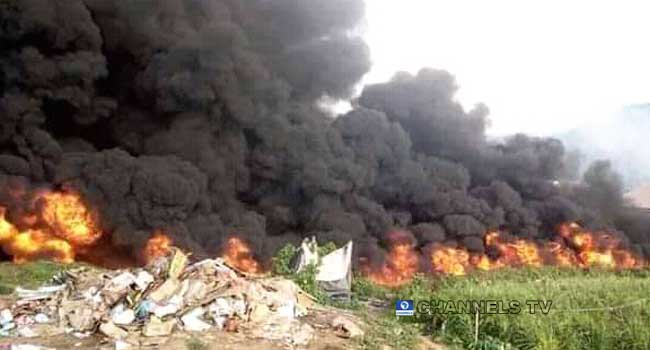 Atleast six persons were said to have died and dozens of others sustained different degrees of burns when tankers exploded in Lapai Local Government Area, Niger State.

Aside from the casualties, no fewer than six tankers and several other cars were also razed by fire that was said to have started after two tankers had a head-on collision and exploded at the early hours on Tuesday.

As gathered, those injured after the explosion were said to have been taken to different hospitals in the local government where it was believed they could receive adequate medical treatment.

The accident came three weeks after the Lambata-Lapai-Bida road started to witnessed heavy traffic, with over a thousand tankers and trailers caught in gridlock.

Confirming the incident, Director-General of the State Emergency Management Agency, Ahmed Inga, and the Chief Press Secretary to the governor, Mary Noel-Berje confirmed the incident.

Noel-Berje said all relevant agencies, including NEMA, the state Fire Service, Federal Road Safety, and the Vehicle Inspection Office have been at the scene of the incident since it happened.

While describing the incident as unfortunate, the aide to the governor commiserated with the victims of the explosion and assured that efforts would be made to ensure safety enforcement on roads.

Mahmud Abdullahi, a former spokesman to late former governor, Abdullahi Kure, attributed the accident to bad condition of the road which was expected to be rehabilitated by Federal Government.