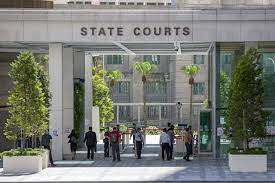 A State court in Singapore has arraigned a 68-year-old man, Wong Poh Kun, who was charged for defrauding an unsuspecting woman of $1.5 million.

Wong Poh Kun was accused of duping the victim into believing that the $1.5 million she was transferring to the bank account of an Asia Alternative Fund was meant for a loan of $15 million but she never received the sum.

Confirming the arraignment on Friday, a police official who was not identified said that the criminal offence allegedly took place on 27 February last year and they received a report from the victim who wanted to obtain a $15 million loan.

“The victim was asked to make payment of $1.5 million to a loan broker to secure the loan, and in return, would receive the loan in tranches.” he said.

According to him, preliminary investigations revealed that the suspect retained $1.25 million while the remaining sum was paid to the loan broker. Thereafter, the suspect remained uncontactable.

He further disclosed that the investigations also revealed that the suspect was believed to be involved in other similar cases, adding that if found guilty of his cheating charge, he faces up to 10 years’ jail and a fine.

However, Wong was said to be remanded at Central Police Division as the case will be mentioned in court again next Friday, January, 14.