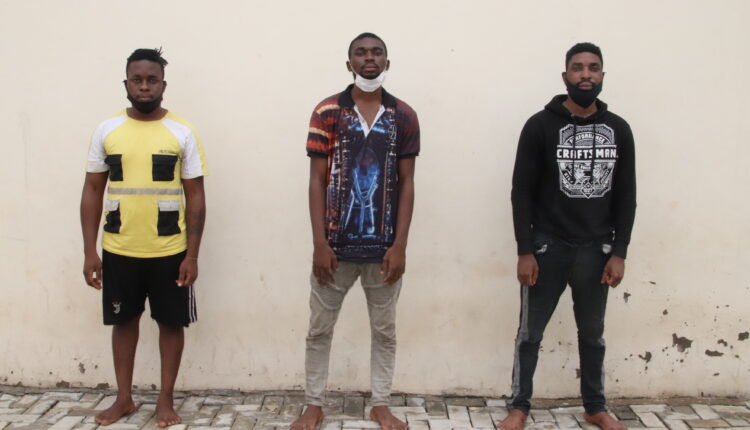 Three blood brothers, Emmanuel, Henry and Matthew Ushie, who were identified as experts in defrauding unsuspecting Nigerians on internet, have been arrested by Nigerian Police for impersonating and creating fake foundation on facebook with name of innocent Nigerians they used in scamming unsuspecting members of public.

It was gathered that the syndicate arrest occurred after police’s Intelligence Response Team (IRT) had several complaints from the siblings’ gang victims, reported to have been defrauded through a Frank Mba Foundation Facebook and First City Monument Bank (FCMB) accounts.

After the arrested, Emmanuel, 23, was identified as leader of the gang, both himself and that his two brothers, Henry, 30, and Matthew, 28, run on pretext that the created foundation was raising money to help vulnerable Nigerians during the Covid-19 pandemic. 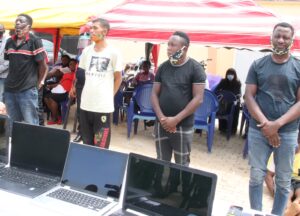 Through a statement released on Monday by the police force Public Relation Officer, DCP Frank Mba, the force also indicated that 24 other cyber criminals were paraded at its headquarters and that 11 laptops, 37 mobile phones, 11 SIM cards of different telecoms networks, five international passports,  12 ATM Cards,  fake US Dollar notes and quantities of dry leaves suspected to be Marijuana were recovered from the suspects during their arrest recently.

It said: Operatives of the Nigeria Police Force arrested twenty-four suspects comprising 23 men and one woman for cybercrime and other related offenses”.

According to the statement: The suspects were arrested for their involvement and indictment in cases of romance and online dating scams, generating and deployment of fake bank alerts, hacking and fraudulent wire transfers, cyber stalking and impersonation of high-profile personalities in Nigeria and across the world.

It disclosed that the trio of  Ushies created the facebook account and fraudulently operated bank account to defraud innocent Nigerians of their hard earned money and that investigations by the police operatives attached to the IRT revealed that the brothers engage extensively and serially in such frauds and other related cyber crimes.

“Further investigation reveal that Mathew had been in 2019 arrested in Ghana after he was involved in fraud where he and other international fraudsters used name of Inspector General of Police of Ghana, John Kudalor to defraud unsuspecting Ghanaian policemen in the guise of providing opportunity for them to attend United Nations peacekeeping mission using a fake Facebook account”.

“Similarly, Henry had also been arrested in 2017 by the IRT for impersonating then ACP Abba Kyari, the Commander IRT on Facebook and defrauding many innocent Nigerians before he was arrested and subsequently charged to Court for impersonation. He eventually got bail from the court and went back to same crime”.

The  Inspector-General of Police, IGP Abubakar Adamu, assure Nigerians of the continued resolve of the force to rid the country of all forms of crimes and criminality including cyber crimes.

He urged Nigerians to channel their energies on positive conducts on cyberspace, cyber resources and the social media, and shun related negative influences.

“We assured that the arrested suspects would be charged to court at the conclusion of investigations”.