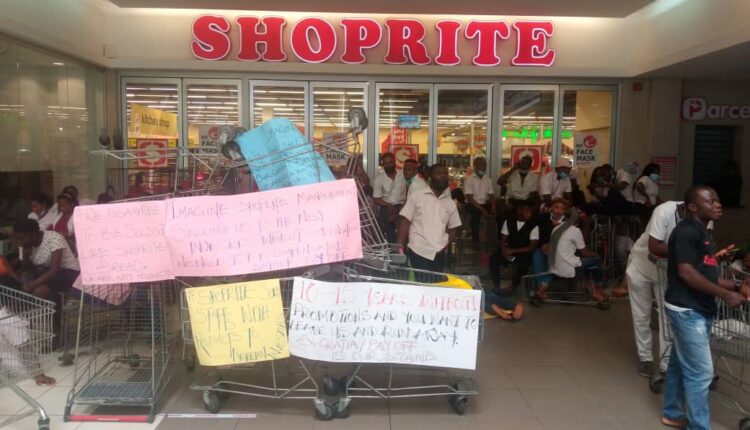 Staff of Shoprite retail shops in Ikeja  Shopping Mall and Festival Mall in Amuwo Odofin, all in Lagos, on Tuesday picketed  the company over grievances with the management of the company including  anti-labour tendencies of the  retail shopping giant and lack of clarity on the ownership of the company.

The workers  blocked the entrance and blocked entrance into the shopping hall using shopping trolleys  barricade. They also formed a human barrier in front of the entrance carrying placards.

“We are here to fight for our rights – our payoffs and compensation,” a male Shoprite staff told reporters.

“We say no to modern-slavery,” says one of the notices posted on the locked doors of the store at the Festival Mall.

A protesting staff at Ikeja referred to the planned takeover of the company by new investors as part of the reason for the protest.

He said the protesters are not “aware of their (new investors) plans for us” after some of them have worked for the company for close to 10 to 15 years.

The company said it has been approached by potential investors willing to take over its Nigerian operations. It said it is considering an outright sale or parting with a majority stake in its Nigerian subsidiary.

“Following approaches from various potential investors, and in line with our re-evaluation of the Group’s operating model in Nigeria, the board has decided to initiate a formal process to consider the potential sale of all, or a majority stake, in Retail Supermarkets Nigeria Limited, a subsidiary of Shoprite International Limited,” it said.

“As such, Retail Supermarkets Nigeria Limited may be classified as a discontinued operation when Shoprite reports its results for the year. Any further updates will be provided to the market at the appropriate time.”

Shoprite at the time denied it was exiting Nigeria, noting that no one “leaves over $30 billion investment and close shop”.

Fears of layoff and a potential return to the street forced the staff some of which are casual workers to demand payoff for their years of service.

One of the staff insists that they all deserved a payoff  “after some staff here has worked for 10 and 15 years (with) no promotion” with little or no increment in salaries during their years of working with the company.

Another staff said “we are scared of our new investor because we don’t know their plans. They could come in with their staff.”

He noted that a body of Shoprite staffers had submitted a proposal of their demands to the management but they are yet to get a response.