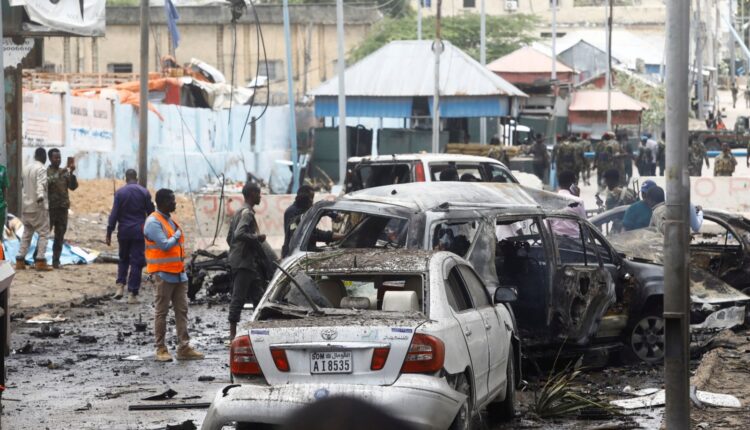 At least seven people, including soldiers and civilians, were said to have died when a terrorist visited the Somalia President’s villa and exploded the bombs attached to his vehicles within the axis.

Aside from the deceased, no fewer than 10 persons including military personnel were said to have sustained varying degrees of injuries during the attack that crippled activities around the seat of power.

Also, the explosion, which deafening sound enveloped the entire Presidential villa, resulted in the destruction of several vehicles and shook nearby houses.

After the attack that occurred in Mogadishu, the country’s capital, on Saturday, paramedics and security forces were seen to have stormed the scene transporting those injured to hospitals for treatment.

Recounting his experience before and after the blast, a mini-van driver, Guuled Ibrahim, said: “The explosion was huge. After the blast occurred, there was gunfire. Minutes later, we rushed to the scene and it was horrific, with a lot of confusion.”

The Somali police spokesman, who confirmed that the attack was caused by a suicide car bombing, assured the efforts have been intensified to prevent an increase in the death toll.

His confirmation was also corroborated by another law enforcement officer, Abdi Hassan Mohamed, and he said: “What we know so far is that at least seven people, among them soldiers, were killed, and more than 10 others wounded in today’s suicide car bomb blast in Mogadishu”.

The Al-Qaeda affiliated al-Shabaab terror group claimed responsibility for the blast shortly after the attack and said that it had targeted a convoy carrying senior government officials heading to the presidential palace.

Al-Shabaab, an al-Qaeda affiliate, was also behind a truck-bombing attack in October 2017 in Mogadishu that took some 600 lives, the worst attack in the nation’s history.