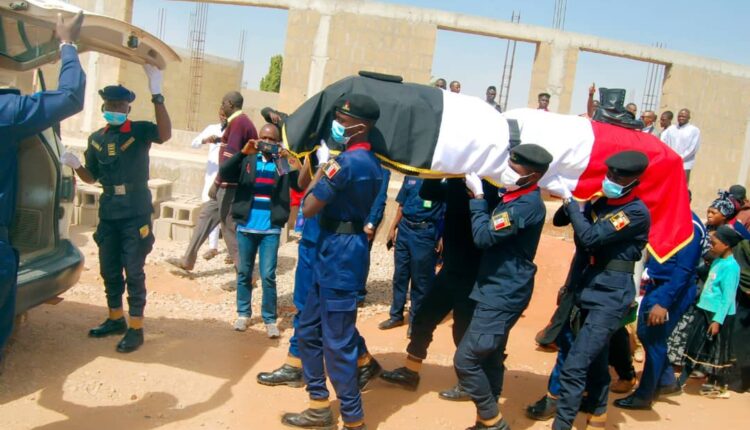 Share
The remains of seven personnel of the Nigeria Security and Civil Defence Corps (NSCDC), ambushed and slain in Birnin Gwari community by bandits while on routine duty of protecting a mining site in Birnin Gwari LGA of Kaduna State, have been laid to rest amid tears from relatives and colleagues.
Their corpses were handed over to families and loved ones at the NSCDC Kaduna Command after a brief interment ceremony held within the command.
The Commandant General of the Corps, Dr. Ahmed Audi, bids the officers and men goodbye when he paid his last respect at the lying-in-state ceremony, held at the Kaduna State Command of the Corps.
Audi expressed rude shock while consoling families, friends and loved ones on the sad loss and prayed for the repose of their souls.
Represented by the Commandant, Kaduna Command, Idris Adah, the CG praised the efforts of the gallant officers who lost their lives in defense of the country and described them as “Heroes, never to be forgotten.”
Addressing people during the ceremony, Audi said, “they died in active service, they fought a good fight with the last drop of blood in their veins to safeguard the country.
“Although the loss is painful and the tears are much, God knows best. We cannot question God; therefore, let us live right, be in peace, love, and harmony with our fellow men because one day, all of us will give account to God.”
He described the 7 personnel who died as committed and dedicated members of the Corps who will be greatly missed by colleagues and friends at work.
“They paid the supreme price for the nation, they died for us, they are our Heroes and we shall always remember them. The world is saddened, the President and Commander in Chief is saddened, Officers and men of the Corps are also saddened.
“What has happened has happened, we, however, look unto God, and pray for forgiveness of their sins and for acceptance on the last day,” he said.
The CG, in a statement released by Director, Public Relations, NSCDC, Olusola Odumosu, on Sunday, assured families yesterday and the next of kin of the deceased of the timely dispatch of benefits accruable to them.
He thanked the President and Commander in Chief of the Armed Forces, Muhammadu Buhari, for remembering the Corps during this trying period.
According to Audi, “Mr President’s Condolence Message motivated us greatly, it renewed our strength and rekindled our hope that we are not alone.
“This means a lot to us as a service and we are grateful for the support we are getting from the presidency and we feel proud serving the nation.
He assured Mr President that, the Corps will not be deterred by the unfortunate incident, rather, it will spur the organisation into more aggressive action against the people’s common enemy.