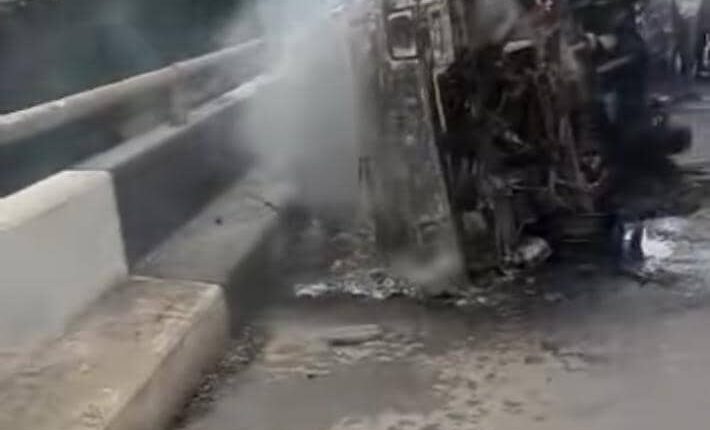 No fewer than seven passengers have been confirmed died and five others suffered different degrees of burns when a commercial bus went up in flames around Iyana Oworo axis of Lagos State.

Among the seven passengers that died after the bus caught fire were four females, two males, and a male child in the state.

Meanwhile, the driver of the commercial bus with number plate KJA 699 GY was reported to have escaped with some burns and a male passenger was given medical care by officials attached to a Lagos State Ambulance Bus Services (LASAMBUS) at the scene.

Also, no fewer than three female adults, who were rescued by emergency officials, have been rushed to Gbagada General Hospital after suffering severe degrees of burns during the accident on Sunday.

The Guild gathered that the bus was heading to Iyana Oworonshoki when it suddenly experienced an electrical fault and suddenly caught fire at about before sunset.

Oke-Osanyintolu added that the deceased bodies have been handed over to the State Environmental Health Management Unit (SEHMU) for proper care pending when their families could identify them.

According to the statement, upon arrival at the scene, a commercial bus of 14 passenger Mazda with registration number KJA 699 GY was discovered to have been gutted with fire.

“Further investigation gathered at the scene revealed that the incident occurred due to recklessness and overspeeding by the driver which resulted in the fire with 12 passengers trapped.

“Arrangements have been made with the officers of the Lagos State Traffic Management Authority (LASTMA) at the scene for immediate removal of the burnt vehicle from the road.

“LRT alongside LRU Paramedics LASTMA, LASAMBUS, SEHMU, and the Nigerian Police are responders at the scene. The road is partially opened for vehicular activities”