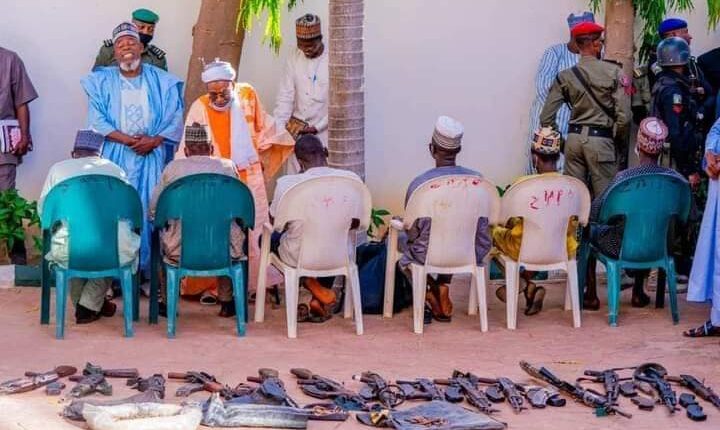 In a bid to ensure peace returns to Zamfara State, atleast seven notorious bandits have repented and surrendered their weapons to the Government as well as took an oath to support tranquility in the state.

The repentant bandits, who surrendered 14 weapons including AK 47 rifles, embraced the peace accord instituted by State Governor, Bello Matawalle, to end the decade-old banditry in Zamfara.

Since the commencement of peace dialogue with bandits, over 1,000 kidnapped victims have been rescued and over 148 weapons with 1,418 live ammunitions surrendered by bandits.

They were received at the Government House in Gusau, the state capital, yesterday, in the presence of some traditional rulers and Islamic clerics who took turns to counsel them as their weapons were handed over to the State Police Command.

At the short ceremony, the bandits, who swore by the Holy Qur’an, indicated their willingness to stop banditry, embrace peace and support all efforts to ensure that residents live in harmony for the rest of their lives.

Addressing newsmen yesterday, Matawalle said they willingly took the decision to accept the peace offered by the Governor and will accept to be re-integrated into the society.

The governor, who was represented by Commissioner for Security and Home Affairs, Abubakar Dauran, stated that they could persuade their former colleagues still involved in the criminal acts to key into the peace process.

He promised to continue with the peace process in the state employing the carrot and stick approach towards a successful end to the menace in the state.

As part of efforts to fight banditry, the Matawalle’s administration has made it a policy to extend an olive branch to bandits who are willing to give up a life of crime.

Dubai goes tough on Nigerians, stops entry through other airlines