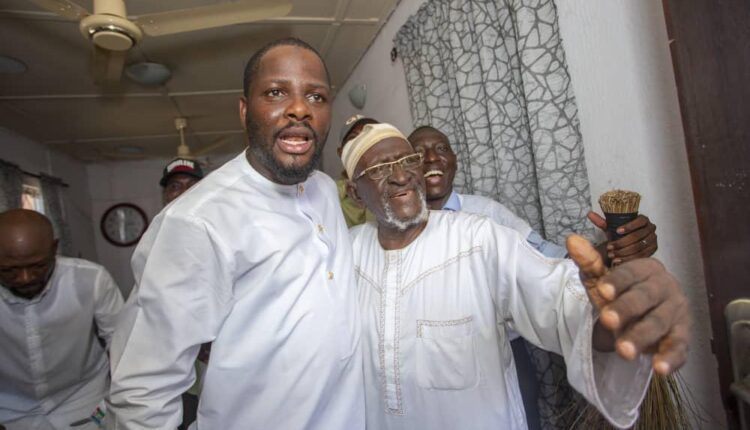 Besides, young stars from all walks of life across Lagos particularly in Surulere axis of the state also declared that Aregbe would be best for the Sururlere local government office, as well as better represent youth, and that they were onground to provide the youth leader the needed support ahead of APC council primaries election.

Their support were coming following Aregbe’s officially flagging off his ambition on Tuesday contrary to speculations emerging from political quarters that he had stepped down for other aspirants after he was persuaded by his leaders.

Kuti and his colleagues stated that Aregbe’s ambition meant a lot to youth and that leaders in APC must consider Aregbe’s candidacy as youth stake within the party.

They said that their entire younger generation would watch closely as events unfold to ascertain if their voice would count during the local government polls this time around.

The young stars indicated that Surulere election and that of other areas where youth were expected to emerge as council chairmen would determine type of democracy APC truly practice and that youth must put their energies together to ensure they have preferred representatives both in Surulere and across other councils.

Kuti, who spoke to newsmen on Aregbe’s candidacy, said that he threw his support for him considering the need for youths to start occupying positions that could address challenges confronting their communities and across the nation.

The artiste, who could not attend the official launch of the campaign in Surulere, added that Aregbe’s decision to start his public office representation from his local government further indicated that he wanted development across Surulere particularly to ensure that the youth become meaningfully engaged to prepare them for the future. 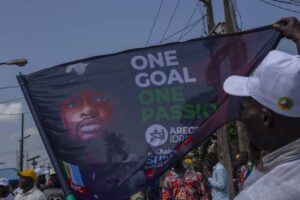 According to him, this is what we expect that our leaders should encourage, we need more youth to assume leadership positions because this will bring even development across the country. Presently, the youth have answers to numerous challenges confronting the nation but they are not occupying positions that will aid them to implement those ideas.

Also, Small Doctor, who hinted at the contributions made by Aregbe to the entertainment industry, stated that the youth of Surulere should consider him as the best person that could address the challenges affecting the council.

While saying that his emergence would reduce unemployment within the local government, the musician added that Aregbe had over the years stand for youth empowerment, saying empowering youths particularly those that have passion for entertainment, which is one area that can reduce unemployment, will bring more development to the council.

“This is one man that I know has the interest of the youth at heart. I know this because he has helped younger generations and I can assure everyone that he will deliver. All that is needed from them is to give him their mandate”, Small Doctor added.

Speaking on his support for Aregbe, Whalemouth, a comedian, stressed that Aregbe has often assisted him and other young artistes with different events that had brought them money to sustain them in the industry.

He said: “I am here to support Aregbe because he has over the years kept us, especially the youth, in the entertainment industry by inviting us to shows where we have gotten funds to improve our skills”. 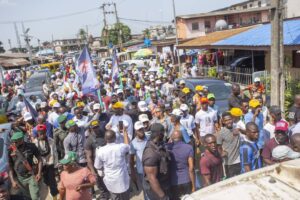 Assuring residents that their mandate would not be taken for granted, the Youth Organizing Secretary hinted that his decision to vie for the seat was a response to the yearnings of Surulere youth that have been craving for development and youth representation in the leadership post.

He added that with the state’s political climate and current economic situation, it was important the younger generations who formed a larger percentage of the country’s population begin to determine their future by deploying their expertise in proffering solutions consonant with their reality and peculiar challenges.

Aregbe noted that his candidature was to assure the youths that they can dare, dream and achieve in terrain otherwise termed exclusive for some citizens, and proved that giving the right opportunity, Nigerian youth can excel in all areas of endeavours, including that of leadership.

At the mega campaign rally in Surulere and its environment, signaling an end to electioneering campaigns ahead of the weekend’s primaries, he maintained that when he assumed office, his first agenda would be to transform Surulere towards improving the economic and social status of the council.

Aside from his transformation agenda, Aregbe stated that topmost of his priorities include empowering the council residents, particularly youths, women, widows, and the aged, adding that no stone would be left unturned in terms of guaranteeing the peoples’ welfare and wellbeing.

He noted that more would be done in turning the council into an economic hub, such that would take many youths off the streets, minimize violence tendencies by ensuring the younger generations are either gainfully employed or become employers of labour.

The aspirant added that with Surulere geographical location and its grassroots understanding, he, alongside his team, was ready to open the council area to local and foreign investors that would boost the local economy with a positive resultant effect on the residents.

On House of Representatives Speaker, Femi Gbajabiamila’s influence in the council, and his effect on the outcome of the primaries and election proper, Aregbe noted that though the speaker remains a leader in the area, he was the chosen candidate of Surulere residents and that has been his motivating factor. 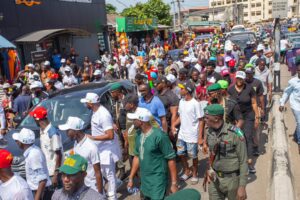 “He is our leader, and I’m sure a good leader and speaker is also a listener. And that is what our people are saying, our people have spoken and they have chosen their candidate. I have the people’s support and backing. So we are expecting the speaker to also let the will of people prevail,” the aspirant said.

In solidarity with the aspirant, thousands of youths, women, and the aged troop out in support of Aregbe with many adorning campaign regalia, including face caps, branded T-shirt, among others with constant cheers at the mention of his name.

Some of the youth that spoke on the reason for their support for Aregbe, said that his contribution over the years indicated that there was no better time than now for them to have a chairman that fell within their age bracket.

A youth, Ibe Ikenna, though not among the youths that troop out to declare their support for Aregbe, stated that his wish had been to ensure development and from his investigation, Aregbe stands for the development and would support him to address the council challenges.

Ikenna, who disclosed that had been an advocate of development, added that his support was not for personal gains but for the development of Surulere and restoration of the council’s status within the state.
Another youth, Olabisi Alaba, who emphasized the need for youths to take over the mantle of leadership, stated that the youths have been sidelined for years and it was time for them to demand their rightful place in the society.
Alaba stated that Aregbe has all the qualities required to lead the council, saying he was born here and understands the council particularly the challenges facing it and solutions that will restore Surulere to its glorious days.