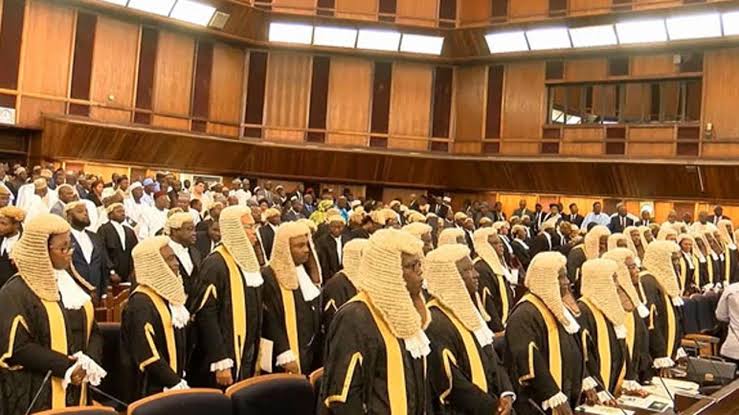 Socio-Economic Rights and Accountability Project (SERAP) has sent an open letter to President Muhammadu Buhari, urging him to publish and implement recommendations of the report on the financial autonomy of state legislature and judiciary submitted in June 2019.

SERAP stressed that the continued attack on the country’s judiciary by the authorities and politicians could only subside, judicial independence and respect for constitutional principles of separation of powers and systems of checks and balances designed to prevent political interference and ensure respect for the rule of law would be achieved with the report implementation.

In the letter dated 27 September 2019, and signed by SERAP deputy director Kolawole Oluwadare, the organization said: “Equal treatment before the law is a pillar of democratic societies. But when judicial financial autonomy and by extension, independence and sanctity is undermined, the scales of justice are tipped, and ordinary Nigerians suffer. In fact, when judicial autonomy and independence is under siege, everyone loses, as the voice of the innocent goes unheard, while the guilty continue to act with impunity.”

The letter read in part: “The failure to publish the full recommendations of the report and to begin to implement them has continued to undermine the country’s judicial systems, and deny citizens’ access to justice and basic human right to a fair and impartial justice system.”

“Ensuring the financial autonomy and independence of the courts would improve the ability of our judicial systems to deliver justice effectively and efficiently. It would also allow the court to jealously guard the rights of innocent men and women, and ensure that the guilty receive a fair and impartial hearing, as well as remove the dangerous possibility of summary justice.”

“We urge you to ensure full respect for the rule of law and due process in words and actions. A financially autonomous judiciary is crucial for the effectiveness and success of your anti-corruption agenda, and important for the realization of citizens’ human rights. Unless the report is fully implemented, trust in the court’s impartiality and independence will continue to be eroded, and the core judicial functions, access to justice, and the broader accountability function of the judiciary, will continue to be undermined.”

“A weak judiciary would mean that impunity for corrupt officials will remain, as the ability of your government and anti-corruption agencies to prosecute grand corruption, as well as public trust and confidence in institutions of government and public officials, will continue to be undermined.”

“SERAP is extremely concerned about the growing attack on the independence of the judiciary and the sanctity of our justice system, particularly the repeated failures by your government, state governments and politicians to respect and comply with court decisions and orders.”

“SERAP notes that you received in June 2019 the Report of the Abubakar Malami-led Presidential Implementation Committee on Financial Autonomy of State Legislature and Judiciary. The committee, inaugurated by you on March 22, 2019 was tasked to fashion out strategies and modalities for implementation of the financial autonomy of the state legislature and judiciary, in compliance with Section 121 (3) of the 1999 Constitution (as amended).”

“When you received the report, you stated that, ‘I went through a terrible time getting here for the three times I contested elections. That is why I want to stabilise the system so that others will not pass through the same experience.’”

“This worrying situation threatens to undermine the judiciary’s fragile independence, and the sacred constitutional principles of separation of powers and systems of checks and balances.”

“Continuing refusal to respect and obey court decisions and orders if not urgently stopped will lead to increased corruption and impunity. Disobedience of court orders is an implicit interference in the judicial system, and shows a flagrant disregard for Nigeria’s Constitution of 1999 (as amended) and international obligations. Persistent disobedience of court orders and decisions threatens any gains in the fight against corruption that your government may have recorded.”

“SERAP is concerned about the growing list of court orders and decisions that have been flagrantly disobeyed by your government, the most recent being the order by Justice Taiwo Taiwo, Federal High Court, Abuja granting bail to the Publisher of SaharaReporters, Mr. Omoyele Sowore, and the reported attempts by your government to drag Justice Taiwo before National Judicial Council (NJC) on account of his decision to grant bail to Mr Sowore.”

“Other high-profile judgments your government is refusing to obey include at least three judgments obtained by SERAP. The first is the judgment by Justice Hadiza Rabiu Shagari ordering the government to tell Nigerians about the stolen asset it allegedly recovered, with details of the amounts recovered. The second judgment, by Justice Mohammed Idris, ordered the government to publish details on the spending of stolen funds recovered by successive governments since the return of democracy in 1999.”

“Another court order that is yet to be complied with is the order for the release of Islamic Movement of Nigeria leader, Sheikh Ibrahim El-Zakzaky and his wife, Zeenah, from unlawful detention, obtained by human rights lawyer and Senior Advocate of Nigeria, Femi Falana.”