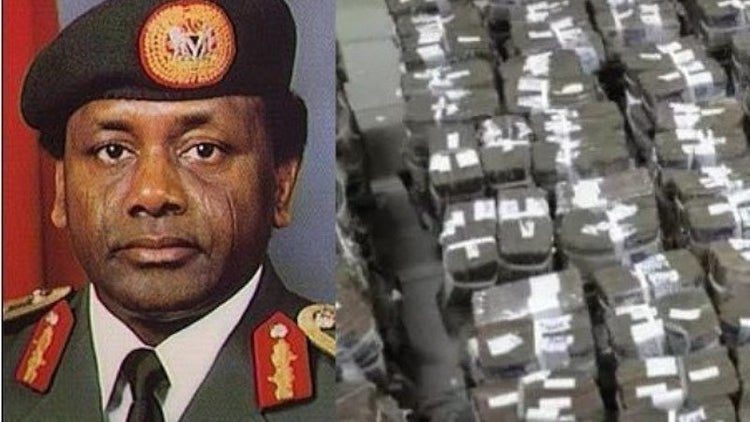 Following the funds received by Federal Government as funds stolen by former military head of state, Sani Abacha, Socio-Economic Rights and Accountability Project (SERAP) has issued seven-day ultimatum to the Government, demanding that it publish exact public funds stolen under the regime.

SERAP also demanded that the Apex government publish details on how about $5 billion loot already recovered since return of democracy in 1999.

The demands were contained in the two FoI requests dated 14 February 2020 sent to Mrs Zainab Ahmed, Minister of Finance, Budget and National Planning and Attorney General of the Federation and Minister of Justice, Abubakar Malami which was signed by the organization’s deputy director, Kolawole Oluwadare, and made available to newsmen on Sunday.

It said: “If we have not heard from you within 7 days as stated, SERAP shall take all appropriate legal actions under the FoI Act to compel you to comply with our request. Access to the details sought would allow Nigerians an opportunity to assess the impacts of any projects carried out with the funds”.

SERAP further demanded that Federal Government disclose details of projects executed with the Abacha loot and their locations, details of companies and contractors involved in the execution of any such projects, details of all the agreements on the loot, the roles played by the World Bank and other actors, as well as the implementation status of all projects since 1999.

“We are concerned that substantial part of the estimated $5 billion returned Abacha loot since 1999 may have been diverted, re-stolen or mismanaged, and in any case remain unaccounted for.

“Publishing the details of projects on which Abacha loot has been spent would allow the public to know the specific projects carried and the areas of the country in which the projects have been implemented as well as the officials that may be responsible for any alleged diversion or mismanagement of the loot.

“Getting to the root of the exact amount of the Abacha loot and how the returned funds have been spent is important for the success of the government’s fight against grand corruption and would reassure Nigerians that the government is truly committed to ensuring full accountability for the alleged corruption and mismanagement in the spending of the funds.

“Any failure or refusal to provide the information requested will be clearly inconsistent with the letter and spirit of the FoI Act. The accountability of government to the general public is a hallmark of modern democratic governance, a norm of human rights and a tool to curb corruption.

“SERAP is concerned that the allegations of corruption and mismanagement involving the use of Abacha loot may be responsible for the increasing level of grand corruption over the years and the entrenched impunity of perpetrators.”

“Publishing details of spending of Abacha loot by successive administrations would also ensure that persons with public responsibilities are answerable to the people for the performance of their duties including the management of Nigeria’s commonwealth.”

“Transparency and accountability enable citizens to have a say about issues such as the spending of returned Abacha loot, that matter to them and a chance to monitor and influence how the funds are spent as well as hold those managing the funds to account in cases of diversion or mismanagement.”

“The government ought to come up with an Abacha loot scoreboard to determine the exact amount stolen and the extent of transparency and accountability of the returned loot since 1999.”

“If there is any indication that any of the recovered Abacha funds have been diverted, re-stolen or mismanaged, for such cases to be immediately referred to appropriate anti-corruption agencies for effective investigation, and prosecution if there is relevant admissible evidence.”

“A scoreboard for the actual amount stolen and the spending of returned loot by each administration since 1999 would encourage more transparency and accountability and ensure that the funds reach the real victims of corruption as well as reduce concerns by Nigerians, the holding states and other partners about the returned loot being diverted, re-stolen or mismanaged.”

“According to our information, a special panel set up on 23 July 1998 by the former head of state General Abdulsalami Abubakar to probe the late military dictator General Sani Abacha stated that he stole over $5 billion between 1993 and 1998 when he was in power. Much of the stolen public funds have been returned to Nigeria.”

“The report by the panel shows that the government recovered some $635 million, £75 million, DM 30 million and N9 billion as well as several vehicles and properties in Abuja, Lagos and Kano together with 40% interests in West African Refinery in Sierra Leone. Other assets were recovered from the Abacha family and associates.”

“Furthermore, former president Olusegun Obasanjo administration also reportedly recovered over $2 billion of Abacha loot. Mr Obasanjo would seem to confirm this fact when he stated in the second volume of his book titled My Watch that: ‘by the time I left office in May 2007, over $2 billion and £100 million had been recovered from the Abacha family abroad, and N10 billion in cash and properties locally.’”

“The government of president Muhammadu Buhari has also recovered several millions of dollars of Abacha loot since assuming office in May 2015, including $321 million from Switzerland, and $300 million from the US and Jersey.”