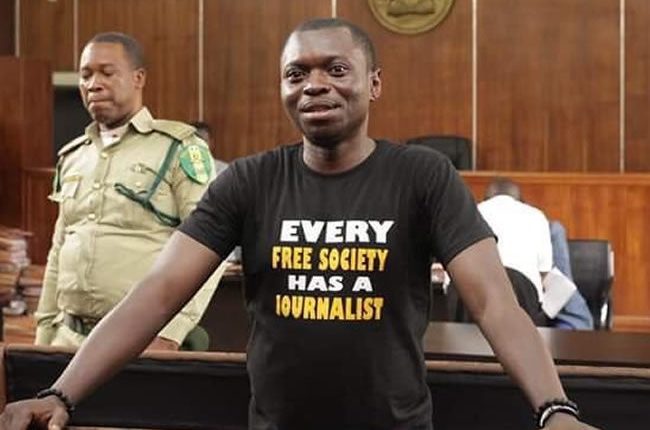 Worried by prolonged detention of a journalist, Agba Jalingo, the Socio-Economic Rights and Accountability Project (SERAP) has dragged Federal Government and Cross River state government to Economic Community of West African States (ECOWAS) Court of Justice in Abuja, to seek his release.

SERAP added that Federal Government and the State governor, Ben Ayade, have used strategies to continuously detain the journalist with unfair prosecution and persecution.

Jalingo, who is the publisher of CrossRiverWatch, was arrested on August 22 last year over a report alleging that Ayade diverted N500 million belonging to the state.

In the suit number ECW/CCJ/APP/10/2020 filed last week at the ECOWAS Court, SERAP argued: “the sole objective of the government of Nigeria and the Cross River state government of governor Ben Ayade is to perpetually keep Agba Jalingo in arbitrary detention and to silence him simply for expressing critical views and carrying out his legitimate job as journalist.

“This is not the first time the government of Nigeria and the Cross River state government of governor Ben Ayade have taken actions to intimidate, harass and suppress journalists through the instrumentality of trumped-up charges and use of overly broad and unjust laws, including section 24 of Nigeria’s Cybercrime Act, 2015, which provides for the offence of cyber-stalking,” it added.

The suit filed on SERAP’s behalf by its solicitor Kolawole Oluwadare, states: “the government of Nigeria and Cross-River state government are using vague laws that give officials massive discretion to undermine human rights. They are punishing Agba Jalingo and other journalists and silencing them for their reporting, thereby undermining Nigerians’ right to information, to public participation, to open and democratic governance in the country.”

The suit read, in part: “If freedom of expression and media freedom are to have true meaning in a democracy, these rights necessarily must include the freedom to criticize the government and its functionaries. Indeed, the idea of a democracy is that the people are encouraged to express their criticisms, even their wrong-headed criticisms, of elected government institutions, in the expectation that this process will improve the process of government.

“The harassment, intimidation, unfair prosecution and arbitrary detention of Agba Jalingo simply for exercising his human rights violate Nigeria’s international human rights obligations, including under the International Covenant on Civil and Political Rights and the African Charter on Human and Peoples’ Rights to which the country is a state party.

“Freedom of expression is a fundamental human right and full enjoyment of this right is central to achieving individual freedom and to developing democracy. It is not only the cornerstone of democracy, but indispensable to a thriving civil society.

“In circumstances of public debate concerning public figures in the political domain and public institutions, the value placed by human rights treaties upon uninhibited expression is particularly high.

“The government of Nigeria and the Cross-River state government of governor Ben Ayade have via the charges of terrorism and treason and denial of bail to Agba Jalingo, violated and continued to breach his human rights.

“SERAP contends that Agba Jalingo is being unfairly prosecuted because of his reporting in his online news outlet, Cross River Watch, which alleged that the Cross Rivers State Governor diverted the sum of N500 Million, belonging to the Cross-River Micro Finance Bank.

“On 22nd August 2019, the Nigeria Police, through its special anti-robbery squad arrested Agba Jalingo. On 23rd August 2019, Mr. Jalingo was transferred to a detention facility run by the anti-cult and anti-kidnapping police in Calabar, the capital of Nigeria’s southern Cross River state and was held there for days before his arraignment on 31st August, 2019.”