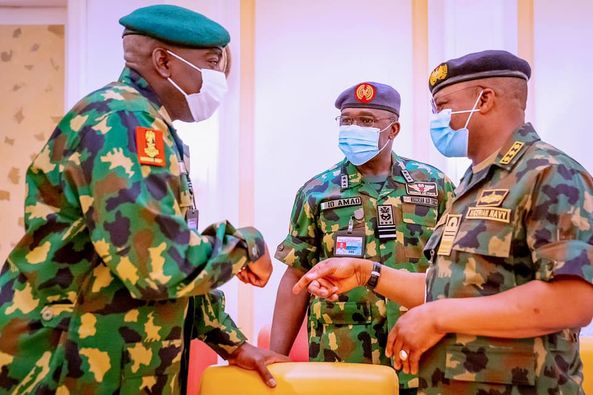 The Nigerian service chiefs, the Director-General of the National Intelligence Agency, and the Inspector General of Police and heads of intelligence agencies jointly briefed lawmakers at the National Assembly on insecurity situation across the country.

Aside from the briefings, the security chiefs also took time to explain the measures and strategies being employed in protecting Nigeria and Nigerians from internal and external aggression.

The briefing which was held behind closed doors at the red chamber on Thursday followed growing apprehension on ongoing killings, kidnappings, and other forms of terrorism in the country.

As stated, the briefings from the nation’s security chiefs became imperative as part of measures to ensure Nigerians, including the lawmakers are well informed of the security situation across Nigeria.

Briefing newsmen after four hours of thorough grueling of the service chiefs, the Chairman, Senate Committee on Media and Public Affairs, Senator Ajibola Basiru, said that adequate information were provided by the top security officers and that their strategies were meticulously outlined.

“At an executive session they briefed the Senate comprehensively on the state of security in the country, analysis of the various operations and theatre of activities that they are engaged in, the topography across the six geopolitical zones, the complexities and the challenges that are being faced and ways by which they believe the parliament can work together with the executive and the heads of security agencies to ensure we rein in the atmosphere of insecurity and ensure a long-lasting peace and security for our country,” he said.

Continuing, he said, “Of course, everybody knows that security is a serious matter for which you cannot take with levity when it comes to ensuring appropriate appropriation for that. We are ready to receive supplementary budget.

“We don’t have any doubt that there is synergy among the various security agencies. In fact, from the nature of the briefing that we received, it reassured us as elected representatives of the people that there is indeed a synergy.”

On whether the Senate was satisfied with plans of the security agencies, Basiru said: “I believe that going forward, the confidence has been built between the security chiefs on one hand and the Nigerian parliament on the other hand and that would be a good signal of what we expect in the future.”