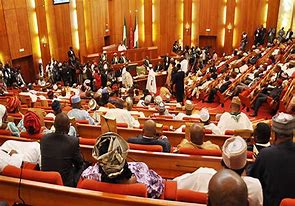 The Senate President, Ahmad Lawan, has disclosed that ninth senate would be setting up a committee, to be presided over by his deputy, Ovie Omo-Agege, and which would be mandated to thoroughly review constitution and come up with a balanced reflection of the country.

It was learnt that the decision to review constitution had come unanimously on the senate floor with aim to take critical look at each law in light of current happenings and situations around the world, with a view to draft a working document suitable for Nigeria and acceptable to all nigerians.

Speaking to newsmen in Abuja, on Monday, ahead of senate plenary resumption, Lawan explained that the committee would be set up and inaugurated, as soon as possible, to serve the nation’s need for adequate legislation and to afford enough time for an in-depth and accurate review to be done, which could not be underestimated considering immense importance of the constitution to any country.

He said that members of the ninth senate were committed to Nigeria’s growth and as such, had agreed that the country’s constution needed a thorough breakdown and review, with view to propose discarding of obsolete laws, inclusion of new legislations based on world realities today and the alterations of sections deemed fit after a proper review processes had been done.

“Such a task has traditionally been chaired by the Deputy Senate President and this precedence will be upheld, specially because we have Senator Omo-Agege who is vast, erudite lawyer and who had played an important and significant role in the 8th Assembly as a member of the Committee on INEC and Constitution Review”.

“The committee will be constituted very soon, either this week or next week by the grace of God because the time is ripe for us to reconstitute the committee so that the members could start to work immediately,”

“We have referred some bills to them already. Traditionally, everybody knows that since 1999 when the Constitution Review Committee was formed in the National Assembly, in the Senate, the Deputy President of the Senate usually heads the committee while the Deputy Speaker is usually the chairman of the Committee (in the House of Representatives). We are going to maintain the tradition in the 9th Senate”.
He expressed hope that once the process was finished, the senate would be able to present the presidency with a working and acceptable document which laid a good foundation for Nigeria’s legal framework going foreward.