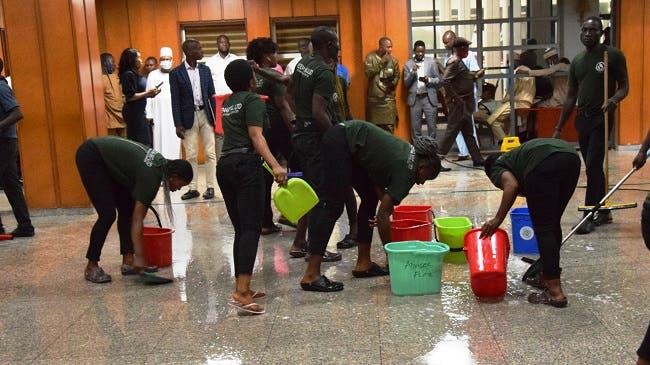 The Senate President, Ahmad Lawan, has distanced the National Assembly leadership from oversight functions involving renovation and maintenance of the assembly complex saying that contrary to widespread belief, the Federal Capital Development Authority was in charge of maintenance of structures in the complex’s premises

He explained that with the maintenance out of NASS leadership’s responsibility, it was important that Nigerians understand and refrain from casting the complex leaking roof’s blame on the lawmakers following yesterday’s heavy rain that prevented the parliamentarians from sitting.

Speaking on Wednesday Lawan who spoke at plenary while ruling on a point of order raised on the matter by Senator Sabi Abdullahi, Lawan noted that the lawmakers were yet to receive the N37 billion budgeted for the complex renovation.

According to him, the fact that there was a leakage to me, is a clear testimony, confirmation, and vindication of the position the national assembly took initially.

“Everyone knows that this place is overdue for rehabilitation. We went to see Mr President and he was gracious and he asked us to meet with FCTA, the owners of the building. Myself, the speaker, the late chief of staff, and the Minister of Finance met to look for money for the rehabilitation of the national assembly. When the N37 billion was approved it was not a national assembly budget, it was an FCDA budget.

“If this place leaks, we are not holding our democracy with the respect it has. We expect the press to inform the people responsibly. This house is the house of Nigerians. It belongs to Nigerians and it deserves to be rehabilitated,” he said.

Corroborating Lawan’s claim, the lawmakers through a statement signed on Wednesday by Senate Spokesperson, Senator Ajibola Basiru, maintained that the Nass leadership has not received a sum of 37 billion nairas or any amount for the renovation of the complex.

“It must be reiterated that the National Assembly Complex is a National Monument which falls under the purview of control of the Federal Capital Development Agency. In essence, the FCDA is responsible for its maintenance as well as renovation and not the Leadership of the National Assembly as being falsely bandied about.

“The leakage witnessed at the foyer of the National Assembly yesterday justifies the apprehension of the leadership of the National Assembly and the FCDA and further underscores the need for an urgent intervention in revamping the dilapidated structures within the complex before it falls into further dilapidation with the attendant huge cost of a possible replacement,’ the statement said.