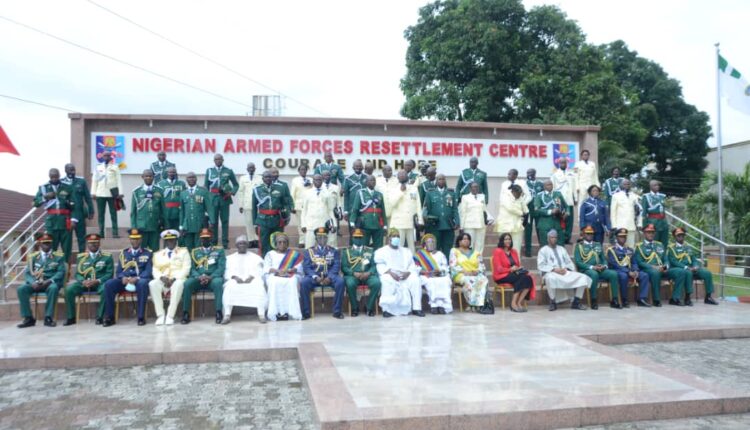 Speaking at the graduation of 256 trainees and 68 officers at the weekend, the Deputy Chairman of the committee, Istifanus Gyang, said the funds appropriated to the institution had been judiciously utilised, stressing that the various projects commissioned were a testimony to the commandant’s good work.

Speaking at the Passing Out Ceremony of the Senior/Mid-Level Officers’ Entrepreneurship and Management Course 01/2020 and NAFRC Trainees Course 02/2020, on Friday, in Lagos, Gyang said from what he saw, the centre would be committed to the vision of excellence in entrepreneurship to all Nigerians.

He said the Senate would not relent in ensuring that the armed forces were equipped and empowered to deal summarily with the myriad security challenges confronting the nation, while assuring that the red chamber would speed up the legislative process to ensure that the Defence Trust Bill got to President Muhammadu Buhari.

Lar disclosed that through the Defence Headquarters (DHQ) authorisation, the centre trained and graduated non-force personnel in various entrepreneurship and management studies for the first time, which had its participants from the Nigerian Customs Service NCS), Department of State Services (DSS), National Intelligence Agency (NIA) and Defence Intelligence Agency (DIA).

According to him, the three courses would get the participants gainfully employed, while the mid-level and senior officer cadets were to go back to their units and start some agricultural business.

“NAFRC remains committed to the vision of being a world-class centre of excellence for the training of vocational skills not only for disengaging military personnel but also to members of security and para-military agencies and the entire Nigerian citizens.

“Retiring servicemen have learnt vocations that would enable them set up businesses and create more employment,” he said.

Briefing newsmen, the commandant revealed that the centre engaged the National Agency for Food and Drug Administration and Control (NAFDAC), for those that would want to invest in businesses that require company and name registration as well as ready to provide them with advisory services to invest wisely.

In his welcome address, the special guest of honour, the Chief of Defence Staff (CDS), Gen. Abayomi Olonisakin, enjoined disengaging personnel not to be dismayed in contributing positively to the society, even as they transferred from active military service to the legion of veterans who would continue to make positive contributions to the country.

“Remember, you remain ambassadors of the armed forces, and I urge you to continue to support various security agencies, particularly in the areas of community intelligence gathering, maintain your loyalty and dedication to the Federal Republic of Nigeria, bearing in mind that Buhari recently approved enhanced welfare packages for retiring members of the armed forces to have a better post-service life.

“I wish, at this juncture, to commend the commandant of NAFRC and his team of dedicated staff/instructors for their relentless efforts at ensuring that our armed forces personnel are exposed to the latest trends in global entrepreneurship and management training,” he added.